Yesterday, in a special ceremony on the lagoon at Aulani, a Disney Resort & Spa, in Ko Olina, Hawai’i, Hawaiian Dredging Construction Company crew members celebrated with Disney Cast Members upon the completion of major structural work on the new Disney Resort. Disney’s design time will now step in to add the final detailing, theming, landscaping, and all the other magical touches.

Since construction began in 2008, a time-lapse camera has captured all the work to create Aulani’s buildings:

With the structural elements completed, the construction and design groups gathered on the sand to form the image of the Aulani arch. They then transformed it into the familiar silhouette of Mickey Mouse. Mickey, Minnie, and their Disney character pals joined in the celebration. 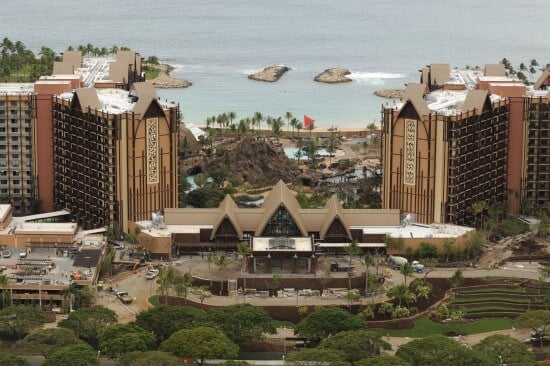 As Walt Disney Imagineers continue adding magic to Aulani, they are weaving Hawaiian stories into the buildings, interiors, art, and gardens of the resort with the help of local architects, artisans, and historians.

UPDATE (6/15/11): Imagineer Joe Rohde recently gave a presentation at the Disneyland Resort (with Carsland construction as a backdrop) detailing all that is coming to Aulani:

Aulani is filled with artwork, sculptures, and hidden creations, as showcased in this video: 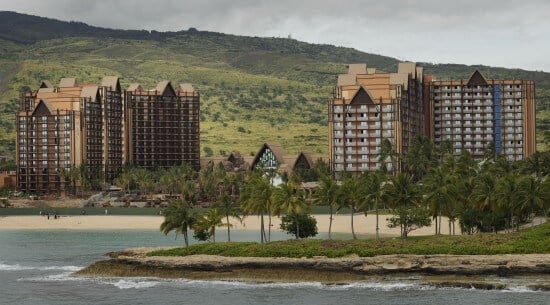 Take an aerial trip over Aulani in the video below:
https://www.youtube.com/watch?v=n3AP00sQAWM

See more of Aulani’s rooms and beach, as well as another glimpse at the construction of the new Disney Resort:
https://www.youtube.com/watch?v=SY2mizYoSBw

Aulani opened to the public in Hawaii on August 29, 2011, is currently selling through the Disney Vacation Club.