The Haunted Mansion at Walt Disney World’s Magic Kingdom will soon be home to surprising new effects that will leave Guests’ heads spinning – almost literally. When Disney’s Imagineers debut the classic dark ride’s interactive finale scene, Guests will encounter a whole new experience with the ghosts who “follow you home.”

For decades, Hitchhiking Ghosts have “selected” Guests to individually sit within the attraction’s famous Doom Buggies. The ghosts would sit still while Guests laughed at having one of three creepy-but-comical spirits suddenly appear alongside them by way of a row of mirrors. Here’s a look at one of these classic moments, as it’s been seen for so many years: 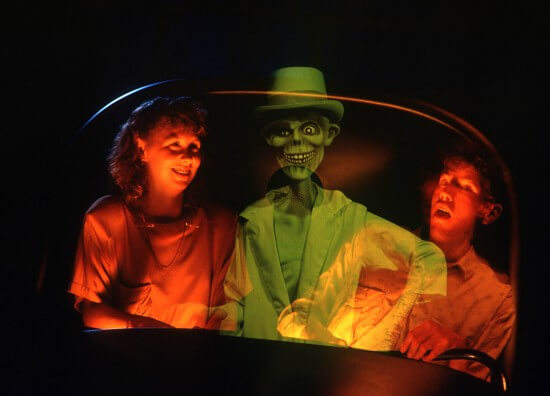 It’s an amusing moment, but certainly no longer impressive, with today’s audiences requiring much more than a two-way mirror to be amazed. Now, using new technology, Imagineers are currently conjuring up various new effects for this scene that are sure to stun even the most jaded theme park fan.

Forget what you may have seen in recent weeks at The Haunted Mansion, with the mirrors covered by a black screen featuring computer-generated projections of the Hitchhiking Ghosts riding along. This is not, nor was it ever intended to be the final effect. It was, in essence, simply an “animated construction wall,” covering up the real magic being created behind the scenes. (Likewise, new animatronic figures recently replaced the temporarily-projected animations of the Hitchhiking Ghosts that precede the mirrors.)

Late last night, after Magic Kingdom had closed, Imagineers asked a few Cast Members to stick around at The Haunted Mansion to test the new effects. They needed a few… live bodies… to occupy Doom Buggies while various apparitions were summoned in the mirrors. The result? Cast Members were delighted, cheering and clapping when the new effects were revealed to them. The famous three ghosts have truly become “playful spooks,” messing with passengers a bit on their way out of the attraction.

Beware, spoilers ahead! The new mirror effects feature a variety of antics performed by the three Hitchhiking Ghosts. I’ve had a couple of the fun new happenings described to me, but don’t read on if you want to be completely surprised. Just know that when the scene soon debuts, you’ll be pleasantly surprised.

Okay, ready for a few details? When the new mirror effects premiere, you might find yourself riding in a Doom Buggy alongside Ezra (the ghost pictured above), but instead of him just sitting there and smiling, he reaches out, lifts your head off your shoulders, and replaces it with his own! How’s that for comedically creepy?

In another playful move, Guests riding with Phineas (the middle-sized ghost carrying a bag) may look into the first mirror only to find they are suddenly wearing the ghost’s hat! Of course, Phineas doesn’t want you to leave with it, so he quickly materializes, snatches the hat off your head, and vanishes once more.

These are just two examples of many new highly interactive scenes that will play out as part of The Haunted Mansion’s new technology-driven finale. It’s all made possible by way of new rows of sensors, cameras, and projectors tracking Guests movements, similar to how an Xbox Kinect recognizes dance moves. But all that technology will be hidden from Guests, leaving only amazement when ghosts that formerly sat stationary truly “come out to socialize” and have a bit of fun in the process.

Last night’s Cast Member testing was just that, a test, so Guests shouldn’t expect to see the new effects today or even this week. They will premiere when Imagineers feel they’re ready, currently in a “test and adjust” phase – and they may change dramatically from what is described above. But when they are soon unveiled, Disney expects to find more “grim grinning” Guests leaving the Mansion than ever before.