First look at Disney toys and new characters for Star Tours: The Adventures Continue offered at Toy Fair - Inside the Magic

At this weekend’s Toy Fair in New York, Hasbro unveiled its line-up of toys that will launch in May when Star Tours: The Adventures Continue opens at Disney’s Hollywood Studios.

Disney Imagineer Tom Fitzgerald recently revealed several characters that will be featured in the updated version of the popular Star Wars-based ride and now Hasbro has taken that announcement one step further with a first look at several of the characters, plus a few more, as they’ll appear in the attraction. 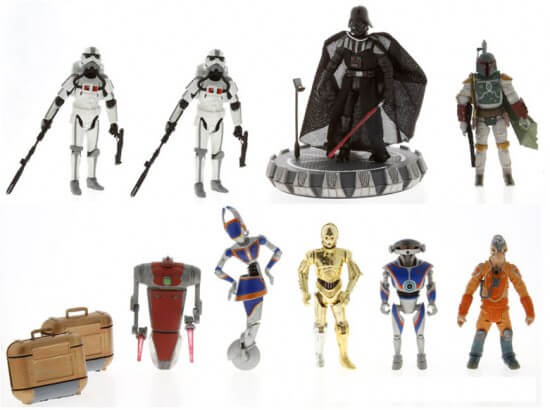 According to StarWars.com, the figures will be available in two Disney-exclusive sets called the “Star Tours Ambush Pack” and the “Star Tours Travel Agency Pack,” both being released in May.

The “Ambush Pack” will contain Darth Vader on some sort of hovering platform, Boba Fett, and two skytroopers. Given the pack’s name, it’s likely that the new Starspeeder 1000 vehicles, which will transport riding guests through the Star Wars universe, will be “ambushed” at some point by these characters during the ride.

The “Travel Agency Pack” features known characters C-3PO (the ride’s new pilot), AC-38 (Ace), and Aly San San as well as two other characters being revealed for the first time. The first appears to be a luggage porter droid, holding aircraft directional wands, with luggage accessories. The other seems to be a Star Tours variation of a Utai, which has previously been released as an action figure. It’s likely these droids and characters will be seen in the queue and early stages of the attraction, before the above-mentioned ambush occurs.

Star Tours: The Adventures Continue will debut at Disney’s Hollywood Studios on May 20, 2011, the same day that Star Wars Weekends 2011 begins.

(Thanks to Brian for the tip!)