Video: More Spooky Fun at Ricky's House on Halloween 2010 - Inside the Magic

Another year of tricks and treats has come and gone. Halloween 2010 wrapped up and all decorations have been put away for next year. But today I share with you a walk-through of what the haunted holiday looked like at my house this year.

For the second time in the roughly six years I have lived in this house, our home owner’s association dropped the ball on Halloween night, closing our community gates before 8:00 pm. As a result, we only received local trick-or-treaters – around 30 of them plus their parents. While the number of visitors was disappointing, it was still fun to entertain (and scare) those who did show up.

Here’s a video of my own Halloween haunt, including a “behind the scenes” look at the new front door scare that awaited trick-or-treaters in 2010:

Each year, I (with the help of my wife) put up our Halloween decorations that morning, as many of our props and electronics would not hold up under poor weather. This year I worked on the newest additions the day before, allowing me to actually finish putting everything up on Halloween before sunset! As a result, I took some first-ever daytime photos of our decorations, seen in the slideshow below.

The highlight of this year’s Halloween at my house was definitely the all-new front door scare. When a trick-or-treater stepped on a pressure-sensitive welcome mat, it triggered a creepy spirit to pop up from the darkness nearby. 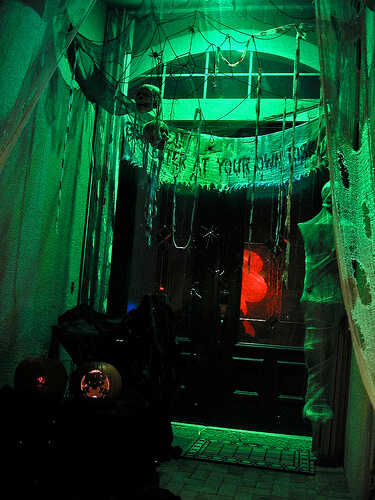 Last year’s front door scare dropped down from above, so I figured an eye-level scare this year would prove to be even more surprising – and it was. The general ambiance around the house was enough to put most approaching trick-or-treaters on edge and the pop-up ghost was a perfect exclamation point, producing plenty of startles and priceless looks on kids’ faces. The reward for braving the scares was a full-size candy bar, Hershey’s, Reese’s cups, or Kit Kat (not the tiny “Halloween version”).

As seen in the video above, the pop-up mechanism for the ghost was taken from a “Rising From the Grave” prop bought at K-Mart. The ghost, resembling a Dementor from the Harry Potter series, was bought at Target and lit from behind its face by attaching small LED light. The combination sat atop a bar stool, attached by packing tape and rope to ensure it didn’t fly off and hit anyone.

Other new additions this year included talking busts (from Sam’s Club), a tombstone lifting ghoul (from Target), an inflatable stack of pumpkins (from Lowe’s), a talking (and quite amusing) skull-on-a-spear (from Target), and a fun green laser light effect on the front door (from Spirit). 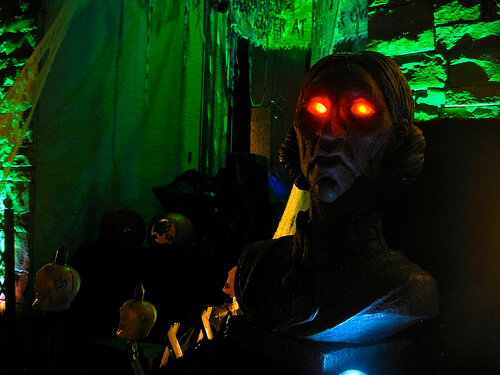 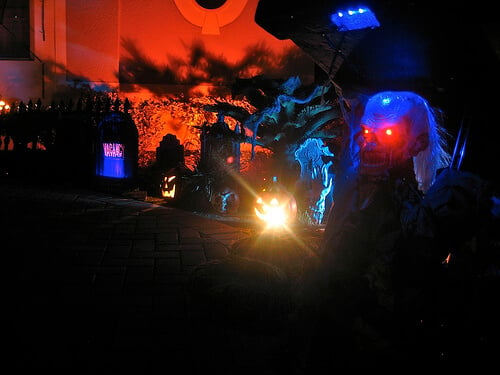 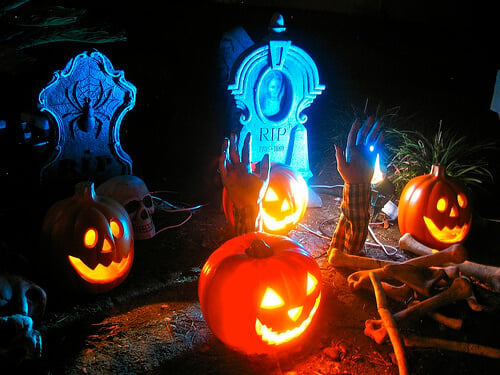 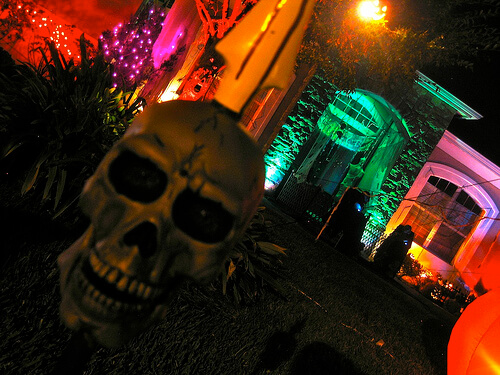 All in all, despite the low number of trick-or-treaters, it was a successful year filled with laughs and plenty of scares. I was told by a number of visitors that they look forward to seeing our house each year and as long as that is the case, I’ll keep it going. I’m already thinking about what I can do differently next year! 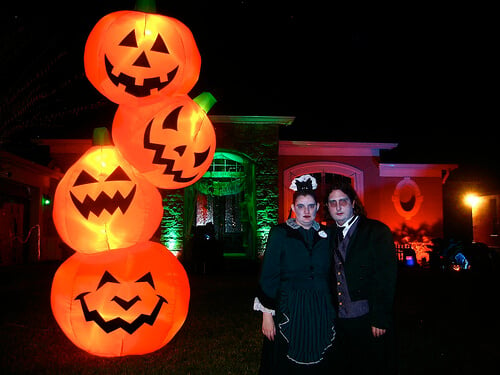 More photos from my house on Halloween: