The famous Star Wars droid C3PO has been part of Star Wars Weekends at Disney’s Hollywood Studios before, but this weekend he began talking with theme park Guests. It’s an interactive experience that takes character meet-and-greets to a whole new level.

Here’s a video of him in action today, posing with a few fans and then shuffling through the park on his way for an “oil change,” talking to a few Guests (including myself) along the way:

C3PO’s limited mobility (he can basically only shuffle his feet) prevents him from quickly walking through the park. As such, he was escorted “backstage” by a Walt Disney Imagineer and several Cast Members. Of course, as you can see in the video above and the photos below, he is mobbed by excited fans along the way. 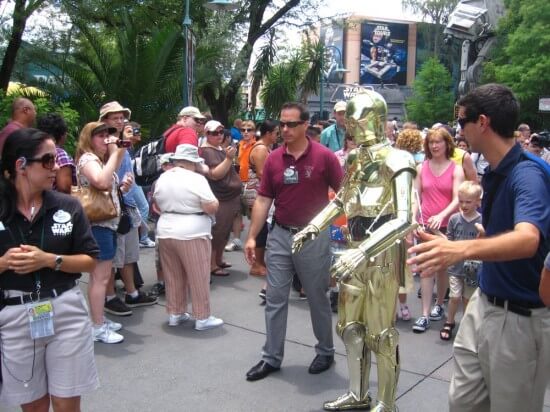 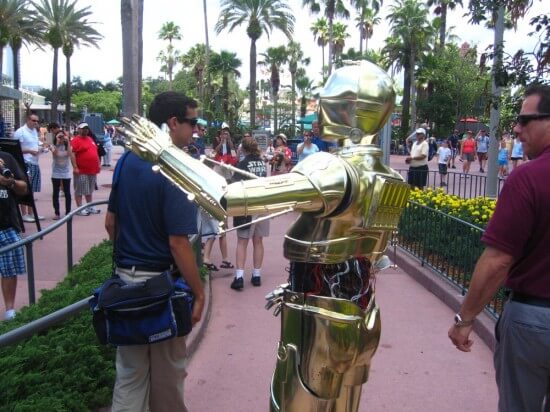 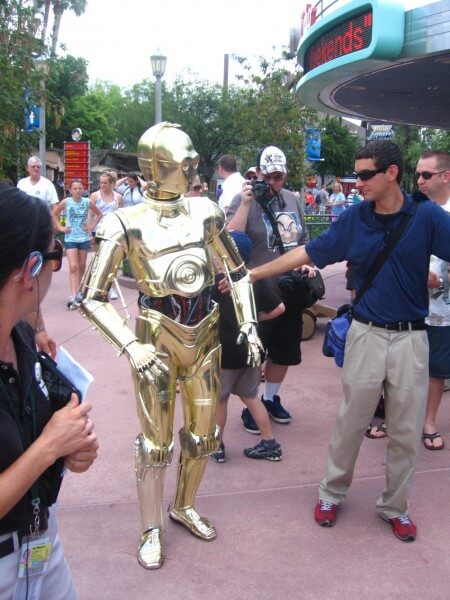 While this talking character is already evoking memories among Disney fans of the recent talking Mickey Mouse meet-and-greet tests at Disneyland, he is actually not a new creation.

To pull the curtain back a little (magic spoiler alert!) I’ve been told that the person in the C3PO suit is a 20-something-year-old man who created it himself, down to the voice modulator that makes him sound like actor Anthony Daniels, who played C3PO in all of the “Star Wars” films. Apparently, this C3PO performer has been contracted by Lucasfilm and approved by “Star Wars” creator George Lucas. He appeared at Star Wars Celebration IV in Los Angeles in 2007, the San Diego Comic-Con, and most likely will be at Star Wars Celebration V here in Orlando in August of this year.

But even if hardcore “Star Wars” fans have met this C3PO before, he is new to the theme park world and is certainly causing a stir. Even Disney’s own Cast Members that I talked to today were a bit star-struck to talk to Threepio. Moreover, the fact that a Walt Disney Imagineer was on hand to monitor the droid’s performance in the park may be telling that Disney is interested in developing their own version of the character for use in future Star Wars Weekends or special events. Perhaps we may even see an interactive version of the C3PO audio-animatronic figure that has been featured in the Star Tours attraction queue for so many years. But that’s all wishful thinking on my part.

Initially, I was told that C3PO would only be at Star Wars Weekends this weekend, ending today. However, I heard today that he’d be here for the remainder of the event, which runs each Friday – Sunday through June 13. But if you want to get your moment with Threepio, be prepared to wait. The lines are long, and characters can be switched out at any time. C3PO’s meet and greet location is between the Star Tours entrance and gift shop, within the Ewok village, and he is scheduled to be out for around 30 minutes at a time. Good luck, and may the Force be with you.