Various reports have shown up online from these previews including a recent episode of the PotterCast (show 219) in which Melissa, one of the show’s hosts, described in detail the queue and walk-through scenes within Hogwarts Castle that lead up to the actual Harry Potter and the Forbidden Journey ride. Similarly, Dijares from Harry Potter’s Page wrote up a similar set of descriptions.

Here I’ve summarized a few of the scattered descriptions, adding imagery along the way, to provide a good, solid idea of what can be expected upon setting foot into Hogwarts Castle for the first time. Even if you’ve read a few of these reports already online, it’s quite possible that you’ve missed a nugget or two (as I had until compiling them all here). I’ve bolded some of the most interesting points.

Spoiler warning: Don’t read further if you don’t want to know specific step-by-step details that lead up to the Harry Potter and the Forbidden Journey ride. Of course, if you do, read on. 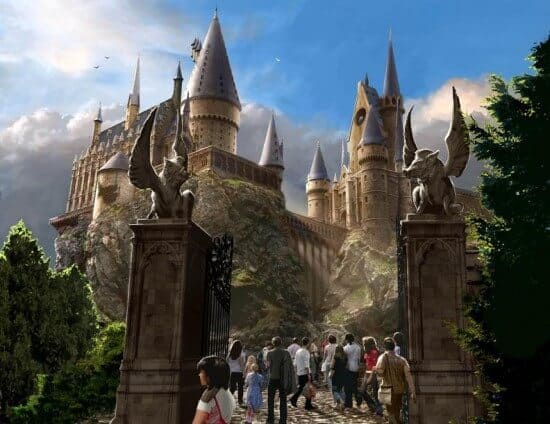 Upon reaching the castle, guests enter and journey up a winding path and through a “dungeon”-like area, passing various items inset into the walls that will be instantly recognizable to Potter fans. These items include…

The Hogwarts architect (as seen in Harry Potter and the Chamber of Secrets): 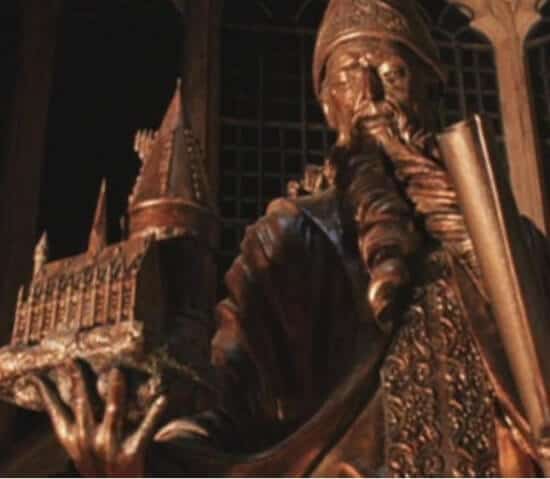 Mirror of Erised (as seen in Harry Potter and the Sorcerer’s Stone): 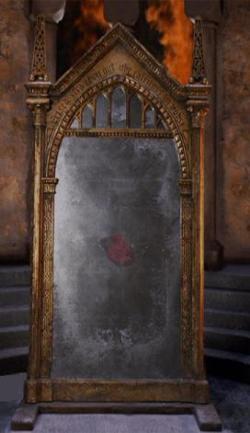 Statue of the one-eyed witch (as seen in Harry Potter and the Prisoner of Azkaban): 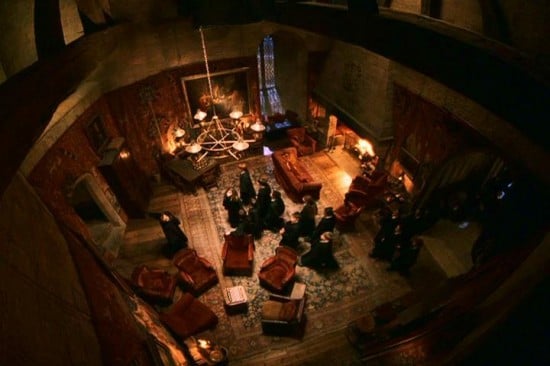 Further around a corner guests find themselves exiting the castle into the outdoor Hogwarts greenhouses (seen below from the Harry Potter films), which contain a large percentage of the queue switchbacks. It is here that guests will spend most of their time waiting, pacing back and forth, with the occasional mandrakes to look at. It’s been said that this portion of the queue can possibly hold guests for hours if necessary.

Back inside Hogwarts Castle, guests encounter a few moving portraits, including one of a new Hogwarts teacher who is going over a few lessons from within his portrait, though occasionally peeks over to a nearby portrait within the Quidditch stadium.

Once guests enter the moving portrait hall, the real storyline for the Harry Potter and the Forbidden Journey attraction begins to be told (photo released by Universal Orlando from the attraction): 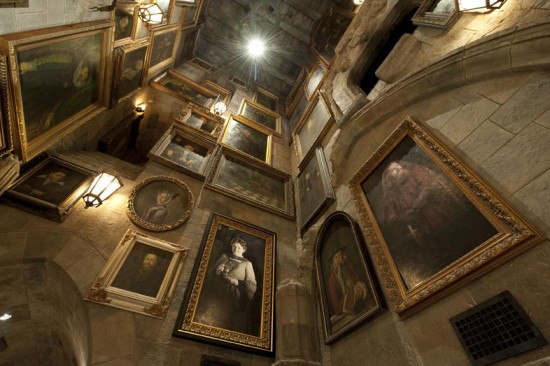 Recognizable portraits include the Fat Lady and the four founders of Hogwarts, seen for the first time ever. Upon entering the portrait hall, Helga Hufflepuff is on the right, holding her famous cup. Godric Gryffindor is nearby Hufflepuff and speaks a bit like Hagrid. Immediately ahead when entering the hall is the moving portrait of Salazar Slytherin, which is a rather tall portrait.

The founds converse amongst each other, talking about Quidditch (there’s a Gryffindor vs Slytherin match going on) and, more importantly, about how Hogwarts has opened its doors to muggles (non-wizards) for the first time. They also mention that Hagrid has lost a dragon, a detail that will likely make a return at some point during the ride portion of the attraction.

It should be noted that while this portrait hall is technically part of the attraction’s queue, guests will not be pushed along and watch the portraits as long as they want (as long as they stay out of the way of guests passing through). Apparently, the entire portrait conversation loop lasts around 5 minutes. Guests utilizing Universal Orlando’s Express Passes will enter pass a different, but nearly identical portrait room with the same experience.

Harry Potter and the Forbidden Journey – The story continues with Dumbledore

Between scene rooms, guests pass through castle hallways, complete with more switchbacks. Next, guests walk past (but can’t touch) the recognizable griffin from the films (photo released by Universal Orlando from the attraction): 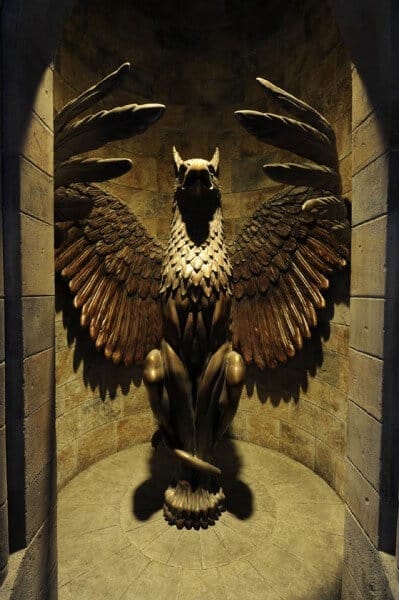 After turning a corner, guests find themselves stepping into Dumbledore’s office (seen below in a still from a video released by Universal Orlando from the attraction). In the back of the room, high above his chair, Dumbledore appears and begins to speak to guests. Dumbledore is not an animatronic figure but rather is said to be shown via “Musion” technology, currently seen to display an incredibly realistic Christopher Walken in their Disaster attraction pre-show scene. 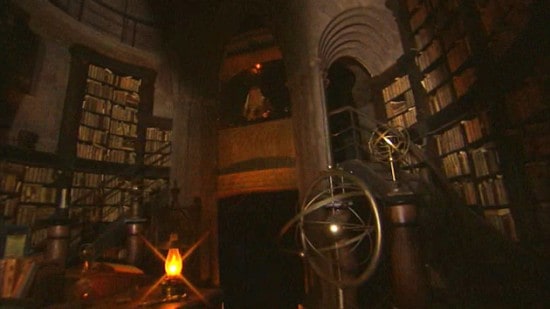 Dumbledore proceeds to tell guests about Hogwarts being open to muggles for the first time and invites them to continue along to receive a lesson on the history of Hogwarts and magic from professor Binns – who is never seen in the films, nor does he end up being seen in the attraction.

Harry Potter and the Forbidden Journey – Encounter with Harry, Ron, and Hermione in the classroom

Guests travel along until they find themselves in the Defense Against the Dark Arts classroom, as seen in the Harry Potter films (still image from video released by Universal Orlando from the attraction):

However, there are no desks in the middle of the room. Instead, that is where guests stand to watch a scene unfold in the front of the class. A door (seen in the image above) mysteriously opens and the voices of Harry Potter, Ron Weasley, and Hermione Granger are heard. Then, once again through the magic of “Musion,” the trio appears from under an invisibility cloak. The characters are played by their film actors, Daniel Radcliffe, Rupert Grint, and Emma Watson.

They speak directly to guests, telling them that rather than sticking around for a lecture from professor Binns, they’d much rather have a proper tour of Hogwarts. The characters say they want to take guests to a Quidditch match and to do so, Hermione will enchant some benches to guide guests around. The dialogue is filled with bickering between Ron and Hermione like:

Hermione: “I’m using a spell that I learned from a world-class Quidditch player.”
Ron (jealous, holding up a wand): “Hermione knows all these spells, you see…”
Hermione: “Ron – you’re making it snow again!”

At that point, some sort of snow effect is seen in the classroom. Guests then are invited to follow a path toward their destination: the Room of Requirement.

Moving out of the classroom, guests find themselves in another waiting area, watching instructional and safety messages for the ride delivered by a few moving portraits, including a quidditch player and an etiquette woman, all a bit tongue-in-cheek.

Further down, the Sorting Hat can be seen before boarding the ride offering additional information about what’s to come.

The Room of Requirement is the loading area (photo released by Universal Orlando from the attraction): 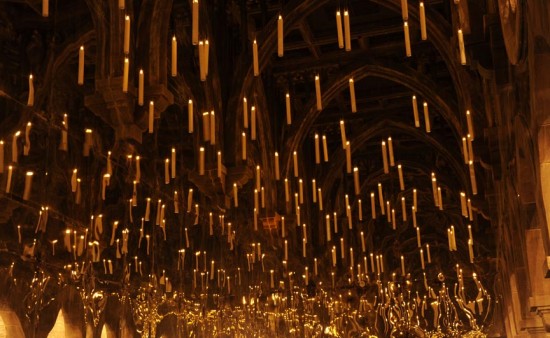 Harry Potter and the Forbidden Journey – The ride itself

Those fan sites who previewed this much of the Harry Potter and the Forbidden Journey ended their tour here, as the ride was not ready to be experienced quite yet. However, a few details were revealed about the ride itself.

The Harry Potter and the Forbidden Journey ride will take guests on a flying journey through recognizable scenes from most of the Harry Potter films and books. The Great Hall should be included at some point, as will a Whomping Willow, spiders, and much more.

The effect of flying around Hogwarts will be achieved using a combination of a Kuka robotic arm coaster and some kind of 360-degree film technology. Guests should not ever see the mechanics involved in the immersive experience.

One final note, offered by Melissa of PotterCast: No house-elves will be seen inside the castle, but they will appear somewhere within the Wizarding World of Harry Potter.

These descriptions are about as close as you can get to being there until the Harry Potter and the Forbidden Journey attraction opens. The Wizarding World of Harry Potter will hold its official grand opening on June 18, though soft openings are expected near the end of May.