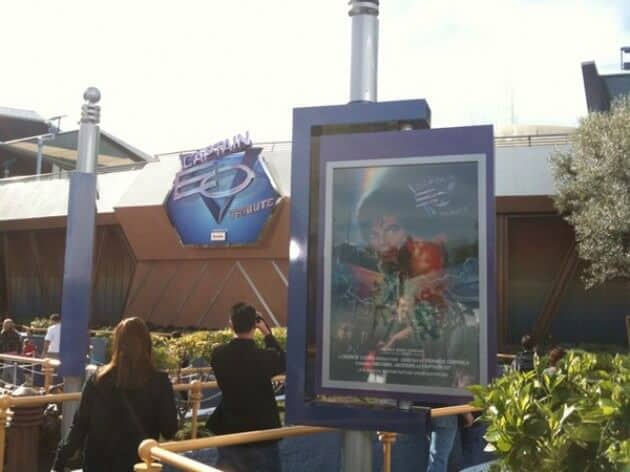 The 3D theme park film “Captain EO” starring Michael Jackson reopened to hundreds of excited fans this morning at Disneyland. While I couldn’t be there personally, I was able to send Jeremiah Daws in my place to cover the opening of the long-rumored return of this popular attraction.

The photo above shows the new “Captain EO Tribute” sign and poster that has been installed in the former location of “Honey, I Shrunk the Audience” – which took over for “Captain EO” in that location in the first place.

Before reaching that point, hundreds of Disneyland guests lined up outside:

Captain EO merchandise was for sale outside the Disneyland entrance, including T-shirts and buttons:

Walt Disney Imagineer Tony Baxter was on hand to mark the occasion, seen here talking with two Captain EO fans who drove all the way from San Francisco overnight to see the return of the film.

Walt Disney Imagineer Tony Baxter was on hand at the opening to discuss the 3D film. With the return of this classic Disneyland attraction, he also discussed the feasibility of bringing back the original Journey Into Imagination at Epcot:

At the opening, Imagineer Rick Rothschild discussed how the attraction originally came to exist and offers insight on what was changed for its current “tribute” version:

(Video/interviews by Jeremiah Daws for Inside the Magic)