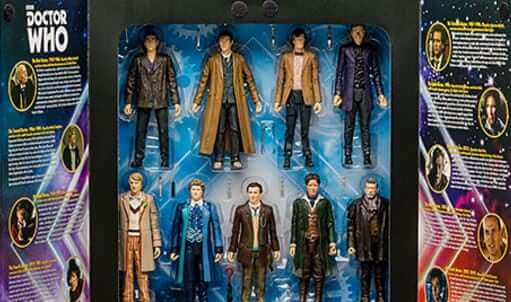 Originally sold at San Diego Comic-Con, this collection of time lords is a Doctor Who fan’s ultimate team up.

It’s now available for the masses, finally. All thirteen incarnations of Doctor Who in one T.A.R.D.I.S. shaped box. Now, there’s now need to wait for an anniversary special.  Each version of the beloved Doctor is included in this timely collectable.  From William Hartnell’s 1963 Time Lord to the 12th Doctor, Peter Capaldi (even Sir John Hurt’s War Doctor) – all thirteen of the gallivanting Gallifryans grouped in one set. Only 3000 of the boxed sets were crafted.  Each figure is about 5 ½’ tall in this officially licensed collectors set.