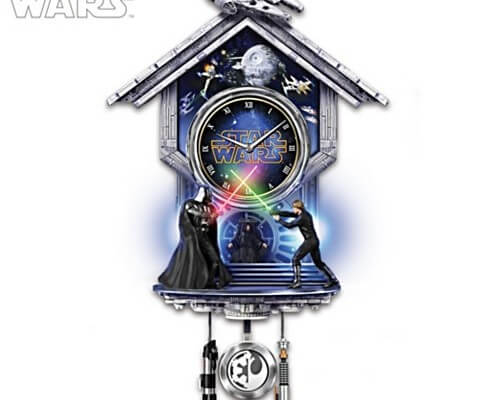 It’s that pivotal moment when the universe hung in the balance: would the light side of The Force prevail, or would the Dark Side win the day? Instantly iconic, the climatic Battle of Endor is captured in highly-dramatic fashion in this collectible STAR WARS™ clock, only from The Bradford Exchange. The STAR WARS: Sith Vs. Jedi Wall Clock showcases the memorable lightsaber duel from Return of the Jedi with intricately-detailed sculptural figures of Darth Vader and Luke Skywalker. Their electroluminescent lightsabers crossed in a clash, they glow in brilliant red and green, against the backdrop of the Emperor which glows blue, watching intently. This collectible clock even plays the STAR WARS theme song for 45 seconds, every hour on the hour, or at the touch of a button!

Officially-licensed artwork is featured across your handcrafted STAR WARS lightsabers battle clock in intense detail, magnified by a sculptural Millennium Falcon that appears to swoop down from above. The body of the clock is expertly sculpted to resemble the hull of an Imperial Star Destroyer, and the face features the STAR Wars logo and traditional Roman numerals. A handsome pendulum below, displaying the insignia of the Rebels on one side and the Empire on the other, and is flanked with hanging weights that resemble the lightsaber hilts of Vader’s and Luke’s weapons. Strong demand is expected for this limited-edition STAR WARS clock. It is a MUST HAVE for fans of the popular movie franchise, so don’t miss this chance – time is running out.