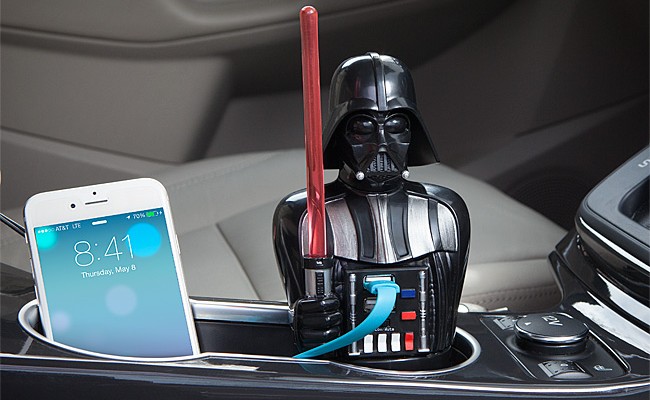 Darth Vader. Once Anakin Skywalker, though that name no longer has any meaning to him. When we were just younglings, that breathy evil space-samurai used to give us nightmares. Now, though, Lucas has turned him into a misunderstood uberjedi with a few mechanical upgrades. So we figured while we had him here at ThinkGeek World Domination HQ we’d take it one step further and give him some more mechanical upgrades.

First, let’s get rid of those legs. Oh, right, already done. Now, let’s shrink him, because everybody knows concentrated evil is better. And let’s give him a backup source of power, in case his Force is disconnected. Voila. Meet the Star Wars Darth Vader USB Car Charger. It sits in your vehicle’s cupholder, connected to the 12V vehicle power adapter (cigarette lighter), breathing quietly. Or loudly, because we’ve also added a switch so you can set the breathing noise to high, low, or mute. His lightsaber and the lights on his chest plate light up, and he has 2 USB charging ports (one at 2.1A and one at 1A) so that your tablets and phones can know the power of the Dark Side. You just gotta bring the right USB charging cable to the party for your device. Vader can’t do everything for you, you know. Dude’s got an imperial fleet to look after.