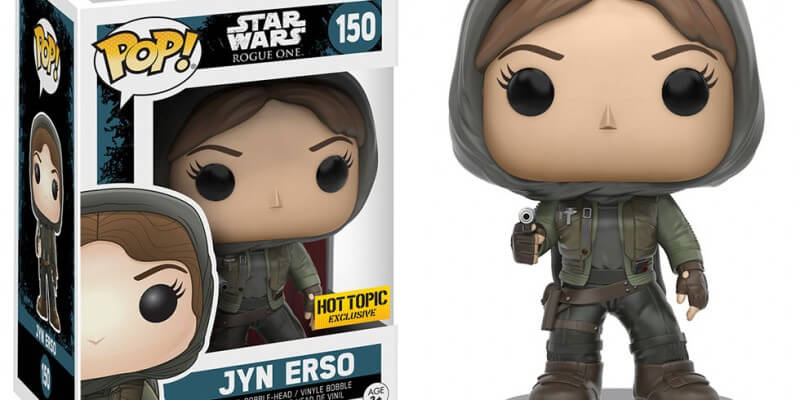 Announcing our new line of Star Wars Pop! vinyl figures from the upcoming blockbuster “Rogue One: A Star Wars Story”!

Putting behind a checkered past by lending her skills to a greater cause, Jyn Erso is impetuous, defiant, and eager to bring the battle to the Empire. Used to operating alone, she finds higher purpose by taking on a desperate mission for the Rebel Alliance! An accomplished Alliance Intelligence officer with combat field experience, Captain Cassian Andor commands respect from his Rebel troops with his ability to keep a cool head under fire and complete his missions with minimal resources.

Captain Andor is available in his brown jacket (exclusively at Target) or mountain outfit! A reprogrammed Imperial security droid now loyal to the Alliance, K-2SO is an alarming sight standing within a secret Rebel base. The pragmatic droid is an effective insertion agent, as he can blend in perfectly at Imperial installations and outposts! Deeply spiritual, Chirrut Îmwe believes all living things are connected through the Force. His sightless eyes do not prevent him from being a highly skilled warrior. Though he lacks Force abilities, this warrior monk has rigorously honed his body through intense physical and mental discipline! The harsh reality of his Imperial-occupied home world has hardened Baze Malbus into a pragmatic soldier and a crack shot with his heavy repeater cannon. Baze has a bravado that provides a marked contrast to the spiritual centeredness of his best friend and moral compass, Chirrut Îmwe! A battered veteran of the Clone Wars as well as the ongoing rebellion against the Empire, Saw Gerrera leads a band of Rebel extremists. Saw has lost much in his decades of combat, but occasional flashes of the charismatic and caring man he once was shine through his calloused exterior. Saw’s ailing health has not withered his resolve to fight!

Saw is available exclusively at Walmart! director of Advanced Weapons Research for the Imperial military, Orson Krennic is obsessed with the completion of the long-delayed Death Star project. A cruel but brilliant man, Krennic has staked his reputation on the delivery of the functional battle station to the Emperor! Specialist stormtroopers stationed at the top secret Imperial military headquarters on Scarif, Shoretroopers patrol the beaches and bunkers of the planetary facility!

Look for the striped Scarif Stormtrooper exclusively at Walgreens! The elite soldiers of Imperial Intelligence, Death Troopers are encased in specialized stormtrooper armor with a dark, ominous gleam. These soldiers serve as bodyguards and enforcers for Director Krennic, a highly placed officer within the Advanced Weapons Research division of the Empire! Imperial Death Troopers are available in their standard armor or chrome (exclusively at Walmart)! The Galactic Empire relies on astromech droids to maintain its machinery, but unlike the Rebel Alliance, Imperial technicians do not grant their droids independence and subject them to frequent memory wipes to keep them subservient! Once a heroic Jedi Knight, Darth Vader was seduced by the dark side of the Force, became a Sith Lord, and led the Empire’s eradication of the Jedi Order. He remained in service of the Emperor for decades, enforcing his Master’s will and seeking to crush the fledgling Rebel Alliance! Our new Wobbler line will also have new Rogue One figures!

Wobblers combine the style of contemporary vinyl figures with the traditional collectability of bobbleheads!

Choose from Jyn, Captain Andor, or a Scarif Stormtrooper!