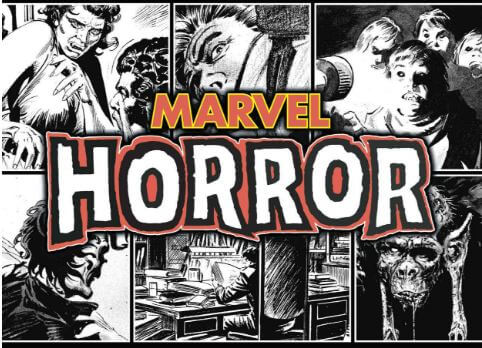 Marvel Comics has always had a dark side. Even before they were called “Marvel,” horror content was unleashed under the “Atlas Comics” name in early 1950’s. Many of these creature features were released in the form of magazines to avoid the strict guidelines of the Comic Book Code.  These not only featured the artistic form of storytelling known as comics (illustrated in black and white), but also included editorial content. “Marvel’s supernatural superstars star in lavishly illustrated tales of horror! And many of these bizarre adventures from the age of the black-and-white magazine are collected here for the very first time! Blade hunts, Dracula stalks and the Zombie shambles! Meanwhile, night brings the daughter of the diabolical Satana! You’ll meet Gabriel, Devil Hunter! Discover the magic of Lady Daemon! Fear the Death-Dealing Mannikin! And brave the Haunt of Horror and the Vault of Evil! They’re rarely seen creepy classics filled with werewolves, vampires and monsters unleashed – read them if you dare!” –Amazon

For horror fans, this collection of early Marvel horror is a macabre must-have.  “Tomb of Dracula” appears in the 1981 successor magazine to the “Marvel Preview” series,  – “Bizarre Adventures” #33. Ghoulish goodies like the very first appearance of “Blade, Vampire Hunter” are also reprinted within (as originally published in the 1975 magazine “Marvel Preview” volume 3).