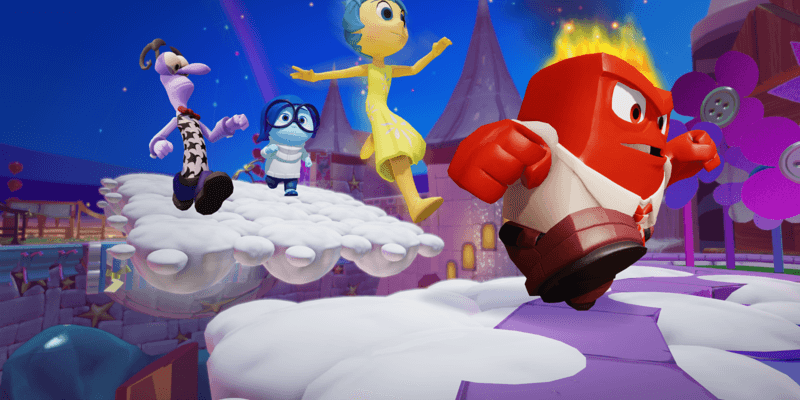 This fall Disney Infinity 3.0 edition is releasing Pixar’s Inside Out play set giving us a whole new way of puzzle-solving game play.

Based on Disney•Pixar’s much anticipated film Inside Out releasing June 19 in North America, the Inside Out Play Set takes place in Riley’s mind after she inadvertently catches a glimpse of a scary movie as she is falling asleep.  Her Emotions — Joy, Fear, Anger, Disgust and Sadness  — rally together to calm the turmoil that has overtaken Imagination Land as a result of Riley seeing the movie.  Broccoli, pie cannons, bats and even swamp creatures are running rampant through Riley’s mind. As single-player or two-player co-op, players must help Riley’s Emotions journey through Imagination Land, work together using each character’s unique skills to defeat enemies, gather Riley’s displaced memories, and return them to the Long Term with the help of Mind Workers before Riley awakens. Three different game modes feature a twist on traditional platforming:
·         Clouds, which fade or emit lightning;
·         Musical platforms, which must be precisely timed in sync with the beat, and;
·         Gravity barriers, which flip the player and the world upside down.
Playable characters for the Play Set include Joy, Fear, Anger, Disgust and Sadness. Each figure comes with special powers to combat swamp creatures and other nightmare beasts:

●     Joy – A ray of lighthearted, optimistic sunshine that brings cheer to every adventure.  She can glide across gaps the others can’t overcome. ●     Fear – Frightful bundle of nerves is the fastest runner.  He can cross bridges and platforms before they collapse. ●     Disgust – Always disgusted, she repels off the clouds letting her jump higher than anyone. ●     Sadness – Worrisome friend turns waves of sadness into melancholy fun, and can travel on clouds without them fading beneath her. All figures will be also playable in the newly enhanced Toy Box 3.0, along with all characters previously released for Disney Infinity.