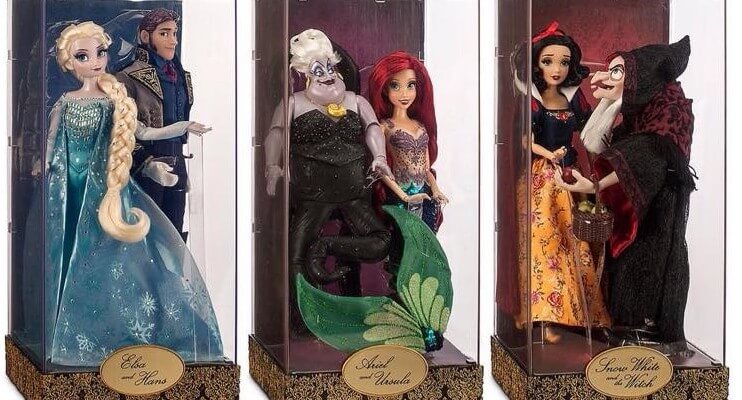 The D23 Expo kicks off this Friday and, as always, tons of exclusive Disney merchandise will become available to the delight of excited fans. One of the most long awaited exclusives is the Disney Fairytale Designer Doll collection. In this new collection we get to see classic Disney heroes accompanied by their villain counterpart.

The new collection will first be available for pre-order at the D23 Expo and will later, presumably, be released at the Disney Store. The Disney Fairytale Designer Collection was carefully crafted by artists inspired by Disney’s true heritage of the fairytale beginning with their 1937 classic Snow White and the Seven Dwarfs. Celebrating the relationship between good and evil, this set features your favorite Disney heroes and heroines, and the memorable villains they faced. Exquisitely detailed, these limited edition dolls have been brought to life with thoughtful attention, and uniquely capture the essence of the fairytale foes, creating a one-of-a-kind set that will be a treasured keepsake of collectors and Disney fans!

Global Limited Edition of 6000
Includes Certificates of Authenticity
Includes five sets of heroes and villains, with each pair coming in its own display case
Sets include: Ariel and Ursula, Rapunzel and Mother Gothel, Peter Pan and Captain Hook, Snow White and Witch, and Elsa and Hans
Each set presented in a special keepsake display case with intricate details on the base, including a golden plate with the name of the specific characters
Includes special Disney Fairytale Designer Collection Gift Bag for each couple in the set