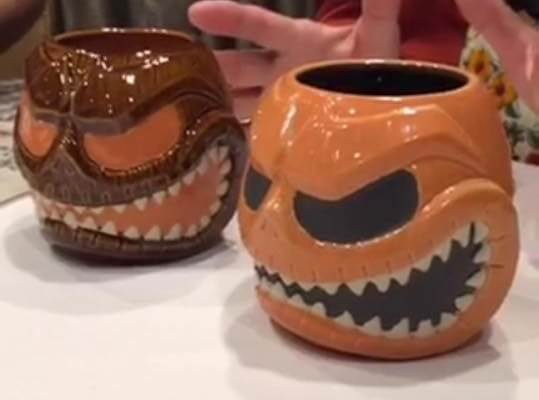 During a Periscope broadcast by the official Disney blog Oh My Disney we got our first glimpse of some exclusive merchandise that will be released during the “MahaloWeen” party at Trader Sam’s – Disneyland. We also got the news that a specific mug will be available outside of the party.

The “MahaloWeen” party had its kick-off yesterday evening and a second party will be happening tonight. Exclusive for the party are the brown Jack O Lantern mug and the Trader Sam print. Luckily, to the happiness of many Trader Sam’s fans, even after the party there will be a chance to score a cool “MahaloWeen” mug. The orange version of the mug will be available at Trader Sam’s – Disneyland starting Wednesday Oct 14th and will only be for sale during October.