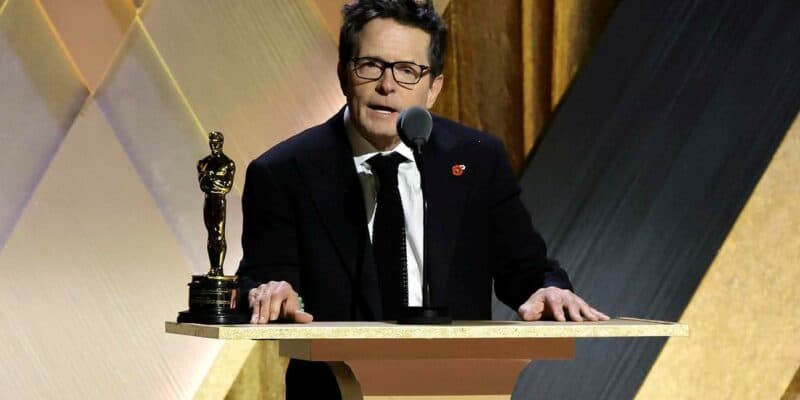 Michael J Fox (Family Ties and Back to the Future) was the recipient of a great award this weekend.

Earlier this week, Michael J Fox was presented with the “Jean Hersholt Humanitarian Award” at the 13th Annual Governors Awards at the Fairmont Century Plaza in Los Angeles.

This award credits stars whose humanitarian efforts have brought credit to the industry.

Actor and longtime friend, Woody Harrelson (The Hunger Games and Now You See Me) presented the award to Fox.

Harrelson shared that Fox “turned a chilling diagnosis into a courageous mission” by founding the Michael J. Fox Foundation to seek a cure. The foundation has raised more than $1 billion for research.

Before Michael arrived on stage, Woody credited his break onto the big screen to Michael, who recommended him for the part of Hank Gordon in the film Doc Hollywood.

“He never asked for the role of Parkinson’s advocate, but it is his best performance,” said Harrelson. “Michael J. Fox sets the ultimate example of how to fight and how to live.”

After receiving a lengthy standing ovation on his way to the podium, the Back to the Future star quipped to the audience. “You guys are going to make me shake.”

The Family Ties star gave an emotional thanks to Tracy Pollan, his wife of 34 years, for her support from the time he was diagnosed. He struggled for words saying, “Tracy made it clear she was with me for the duration.”

Following his speech, Fox asked his wife to join him up on stage.

“I cannot believe I have been standing here for this long, it’s a miracle,” said Fox, eyeing the heavy trophy. “I cannot walk and carry this thing. But I ask Tracy to once again carry the weight.”