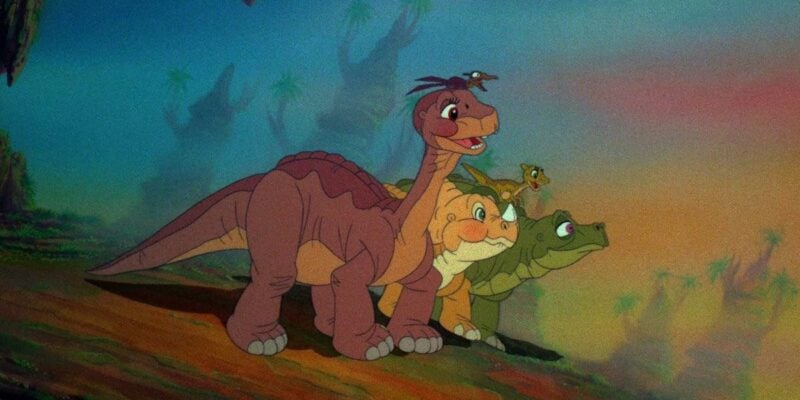 This movie was followed by 13 direct-to-video sequels, along with video games, a tv series, soundtracks, and related merchandise.

The Land Before Time is about dinosaurs living in prehistoric times. It follows a dinosaur name Littlefoot (a long neck), an Apatosaurus, who was orphaned when his mother was killed by a T-Rex.

Right before she dies, Littlefoot’s mother gives her son some words of advice, “Littlefoot, let your heart guide you. It whispers, so listen closely.”

The only land free from famine and despair was the Great Valley.

Along his way, he meets four other dinosaurs and becomes lifelong friends who were also separated from their families and in search of the Great Valley. Cera (a three-horn) Triceratops, Ducky (a big-mouth) Saurolophus, Petrie (a flyer) Pteranodon, and Spike (a spike tail) Stegosaurus.

The film actually goes on to explore the issues of prejudice between the different species and what they have to endure in their journey as they are guided by the spirit of Littlefoot’s mother and forced to deal with a “sharp tooth” (Tyrannosaurus Rex).

Many obstacles are thrown at the group including, fighting amongst themselves, being endangered by lava, getting stuck in tar, and being ambushed by a pack of ‘Domeheads” (Pachycephalosaurus).

Despite everything they went through, the five friends are reunited with their families.

Petrie impresses his family with his newfound flight; Ducky introduces Spike to her family, who adopt him; Cera reunites with her father; and Littlefoot finds his grandparents. The group then rejoins at the top of a hill and embrace each other in a loving hug.

Do you remember watching the Land Before Time? Who was your favorite character?