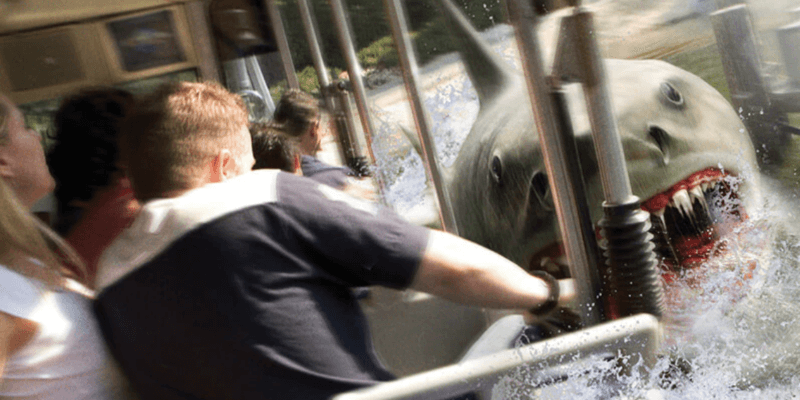 Universal Studios fans, we might need a bigger boat.

Fans at Universal Studios Hollywood and Universal Orlando Resort are some of the most loyal anywhere. They’ve grown up with nostalgia, sharing their love for classics like Back to the Future (1985), E.T.: The Extra-Terrestrial (1982), and JAWS (1975).

However, if you’re heading to Universal Studios Hollywood in the next couple of weeks, you should be aware that an iconic and classic attraction is currently drained.

Of course, we’re talking about the JAWS section of the World-Famous Studio Tour.

As you can see in the video, the shark animatronic is still out and you can see its full body because there is no water to cover it up. As a result, JAWS is completely out of water.

Typically, this part of the tour allows riders to get up close and personal with the shark, but that’s not what happened in this case.

On The World-Famous Studio Tour, you’ll visit 13 city blocks on 400-plus acres of historic studio lot in the largest set construction project in studio history, built with creative consultation from Steven Spielberg himself. You’ll laugh along with comedian Jimmy Fallon, the video host of the Studio Tour. The star of “The Tonight Show Starring Jimmy Fallon” introduces entertaining clips seen on HD monitors in the trams to augment the live Studio Tour guide narration.

New in 2022, now you can see the original Jupiter’s Claim set from Jordan Peele’s latest horror epic, NOPE, in an exclusive behind-the-scenes look. Plus, Telemundo’s Carmen Villalobos takes on a new leading role as the video host of our Spanish-language Studio Tour. The new vignettes provide entertaining insights for guests designed to complement the live narration provided by expert Studio Tour guides.

The Studio Tour is also offered in Spanish on select days. Please check digital boards located throughout the Universal Park for tour times during your visit.

Have you noticed his construction? Let us know in the comments!