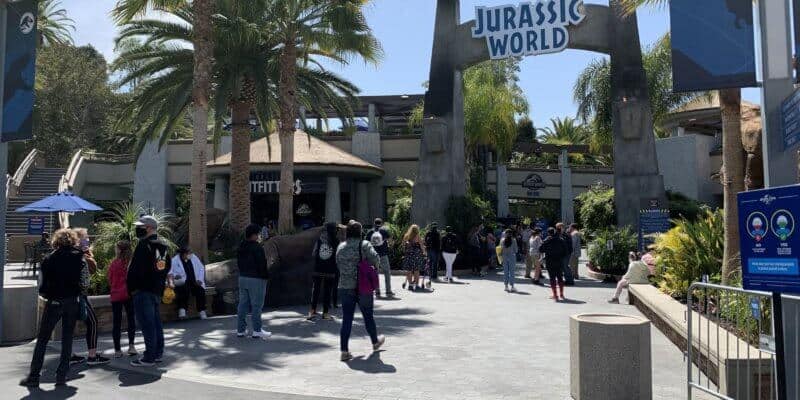 It’s not that often that a well-renowned Disney actress is spotted at the competition.

Dame Judith Olivia “Judi” Dench, CH, DBE, FRSA is known for her roles as M in the James Bond films and Miss Lilly in Angelina Ballerina. She also received Academy Award nominations for her roles in Mrs Henderson Presents, Notes on a Scandal, and Philomena.

For Disney, Dench voiced Mrs. Calloway in Home on the Range, and is the current narrator of Spaceship Earth at the Disney Park EPCOT in Walt Disney World Resort. She made a cameo in Pirates of the Caribbean: On Stranger Tides, and played Queen Elizabeth in Shakespeare in Love, Queen Victoria in Mrs. Brown and Victoria and Abdul, Armande Voizon in Chocolat, Iris Murdoch in Iris, and Commander Root in Artemis Fowl.

Recently, Dench revealed that when she was last in California, her agent took her to Universal Studios Hollywood.

Though she told her that she didn’t want to do anything that “shoots up into the air,” she did find herself on Jurassic World: The Ride. A ride that does not shoot you up in the air, but does have an 80-foot plunge at the very end.

“I told her I didn’t want anything that shoots me up into the air,” Dench said via Crow River Media. “So we were in little boats, and it was absolutely charming. And then suddenly we dropped 80 feet into a pool of water. I was so angry .. I fired her at that minute. I said, ‘You are f****** fired.'”

Judi Dench was diagnosed with a degenerative eye condition, age-related macular degeneration (AMD), in 2012, and admits it is now “annoying” to learn lines due to her eyesight.

However, when asked if she was slowing down, Dench said that she will continue to find a way.

What do you think of this hilarious story from Judi Dench? Let us know in the comments!