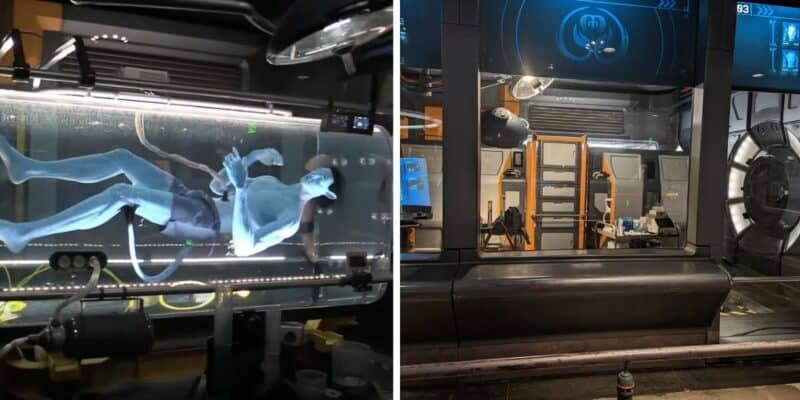 Avatar – Flight of Passage is easily one of the most popular rides at Walt Disney World Resort. The Pandora-themed attraction draws Guests in each and every day and typically has over an hour wait time— if not two hours. However, when Guests wait in line for Avatar Flight of Passage, they can expect a jaw-dropping queue experience.

Located in Pandora at Disney’s Animal Kingdom, Avatar – Flight of Passage blends so many incredible elements from previous rides, most notably with rides such as EPCOT’s Soarin’ as well as Star Tours in Hollywood Studios. But of course, this ride is new and way more modern than both of these (though they are both still extremely fun).

Due to the popularity of the ride, Guests can expect to spend a lot of time in the queue, though, as we mentioned, this line is still quite fun to walk around in. Possibly the coolest aspect of this queue is the giant Na’vi animatronic that floats around in a tube.

This element has become infamous and, to some, is just as much of a draw as the actual ride. But recently, we noticed that this figure is completely absent from the attraction. As you can see in the photo below, the impressive animatronic is now missing:

This is most likely due to maintenance issues though we are not entirely sure at this moment why the figure was removed. Check out our YouTube video of what this feature normally looks like:

When riding Flight of Passage, Guests will “climb atop a winged mountain banshee for a breathtaking 3D flight over Pandora’s otherworldly landscape.” To put it simply, the ride is amazing and is an attraction every Disney Park fan needs to experience.

More on Avatar Flight of Passage at Disney’s Animal Kingdom: