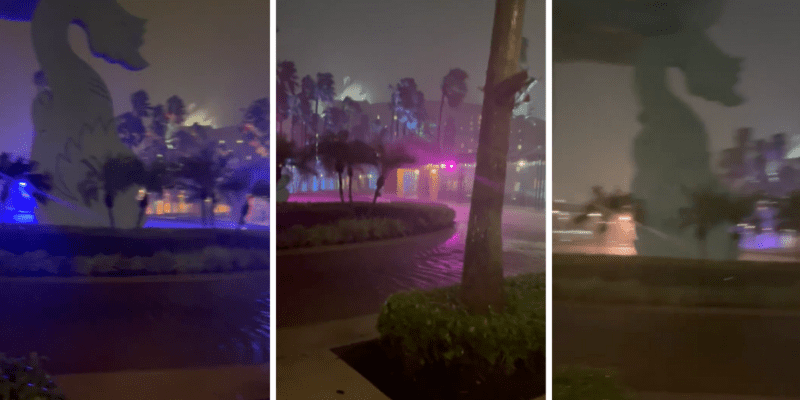 While damage is still yet to be assessed in many aspects, it’s clear that Walt Disney World Resort still felt its fair share of the effects from Hurricane Ian.

Ian has since been downgraded to a Tropical Storm, but it is clear that its effects have been felt, and will continue to be felt over the coming days, and even weeks and months in some areas.

Walt Disney World Resort made the decision to shut down the Disney Parks for both Wednesday and Thursday in anticipation of the storm. The only reported damage at Disney World thus far– which was minor– has been at Disney’s Contemporary Resort. However, damage assessments will be taking place more this afternoon and into the evening when it is deemed safe to do so.

Still, there have already been reports of some flooding at Disney World.

User @JaiHawkFly shared a video last night at Disney’s Swan and Dolphin Hotel, where we can see the outside of the hotel being flooded. No damage on the inside of the hotel has been reported at this time.

This flooding is actually picking up in Orlando.

This flooding is actually picking up in Orlando. #HurricaneIan pic.twitter.com/YJbIBxu9DW

With areas in Central Florida flooded, many have speculated that Disney will remain closed on Friday and then will have to make a decision on this weekend after damage to the property and conditions pertaining to the roads and Orlando area are assessed.

Remember, the most important thing right now for Disney World is the safety of Disney Cast Members and Guests.

Inside the Magic will continue to keep you updated on Disney Park & Resort damage, Disney’s reopening decisions, and the effects of Hurricane Ian across the state.