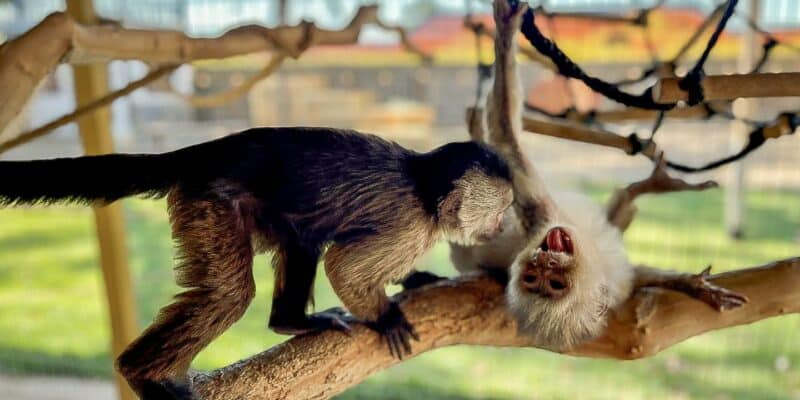 Credit: Conservative Ambassadors- Zoo to You

There was recently a little more monkey business than usual at a popular zoo.

Theme parks, amusement parks, water parks, and zoos are some of the most popular destinations for families around the country to spend time together.

Whether it be taking in the thrills of attractions at popular theme parks like Walt Disney World Resort, Disneyland Resort, Universal Orlando Resort, Universal Studios Hollywood, Busch Gardens, SeaWorld, or Six Flags, or whether it be spending a day splashing at a water park or taking in some amazing sights at a local zoo, there are plenty of opportunities to make memories that last a lifetime during these outings.

Recently, employees and emergency dispatchers were left baffled when a monkey named Route placed a call to 911 in a hilarious zoo incident.

The Capuchin monkey, who is a part of the Zoo to You near Paso Robles in California, picked up the zoo’s office cell phone and dialed 911. The call was disconnected when dispatchers picked up and deputies were sent to the scene.

Our Deputies have seen their fair share of “monkey business” in the County. But nothing quite like this.It all started Saturday night when we received a 911 call that had disconnected. Dispatchers tried to call and text back but they received no response. So Deputies were sent to investigate.

The address took them to the offices of Zoo to You near Paso Robles. No one there had placed the call.

Was someone trying to make us look like a monkey’s uncle? Then they all realized… it must have been Route the Capuchin monkey. Apparently, Route had picked up the zoo’s cell phone… which was in the zoo’s golf cart… which is used to travel around the zoo’s 40 acre site.

We’re told Capuchin monkeys are very inquisitive and will grab anything and everything and just start pushing buttons.

And that’s what Route did… just so happened it was in the right combination of numbers to call us.

The Zoo to You is a part of the non-profit Conservative Ambassadors. The non-profit says its mission is to give a worldwide voice to wildlife by providing a permanent, loving home for displaced, abused, abandoned or permanently injured wild and exotic animals. Sharing these animal ambassadors helps educate learners of all ages about conservation, connecting them to the wild world and inspiring them to protect the planet.

What do you think of this hilarious zoo incident? Let us know in the comments!