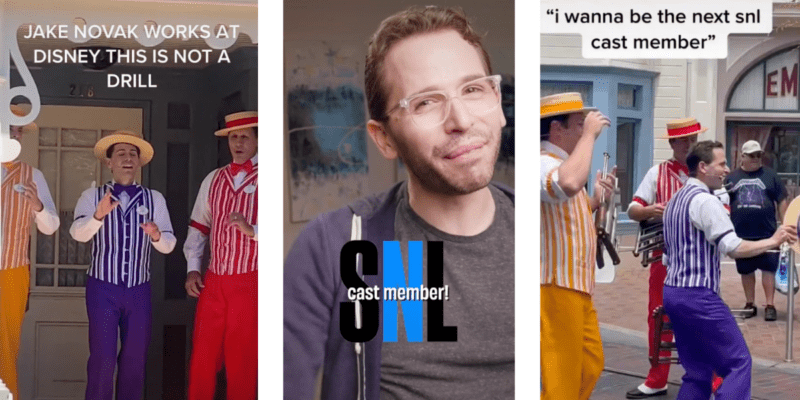 You might not know Jake Novak’s name, but if you have a TikTok account, there’s a good chance you saw his latest video, “I want to be the next SNL Cast Member:”

In the video, Novak raps to Lorne Michaels – creator and producer of NBC’s Saturday Night Live – listing the reasons he should join SNL this September. It received 4.7 million views, hundreds of thousands of likes, and thousands of comments.

Unfortunately for Novak, his video went viral for all the wrong reasons. TikTok users mocked the video, saying things like “I feel like this hurts your chances” and “Your singing is good but you forgot one important part which is to be funny.”

Some negative comments received nearly as many likes as Novak’s original video. Other TikTokers used Novak’s song to make parodies, and Novak never returned to TikTok after posting the video on June 15.

Early in July, some eagle-eyed Disneyland Resort Guests noticed Novak working as a member of the Dapper Dans – a quartet that performs on Main Street, U.S.A., at Disneyland Park. @baftbunk was one of many Guests to post videos of Novak performing:

Another Guest, @giraffesarentreal_, also posted a video of Novak at the Disney Park, though she later set her account to private. Abram, @abram_facts, stitched the footage and asked fellow TikTokers to stop filming Novak at work, noting that it would inevitably lead to harassment and other issues:

“Hey, you guys gotta cut it out,” Abram says. “He’s at f**king work. And I know you’re probably like, ‘Oh, you know, I’m not encouraging anyone to harass him,’ but like, you’re telling everyone where he works. People are going to come, and they’re going to harass him.”

Related: Will the Dapper Dans Perform at Magic Kingdom When Disney World Reopens?

Abram says Novak is “just a struggling actor who made a video that made us all chuckle” and that other TikTokers need to “leave him alone.”

“You’re not going to be able to control every single person,” Abram notes. “So when you post videos of him singing at Disney… that’s going to affect him negatively, and he’s just some guy.”

If you see a performer you recognize at Disneyland or Walt Disney World Resort, it’s best to let them work uninterrupted and wait to interact with them until an appropriate moment.