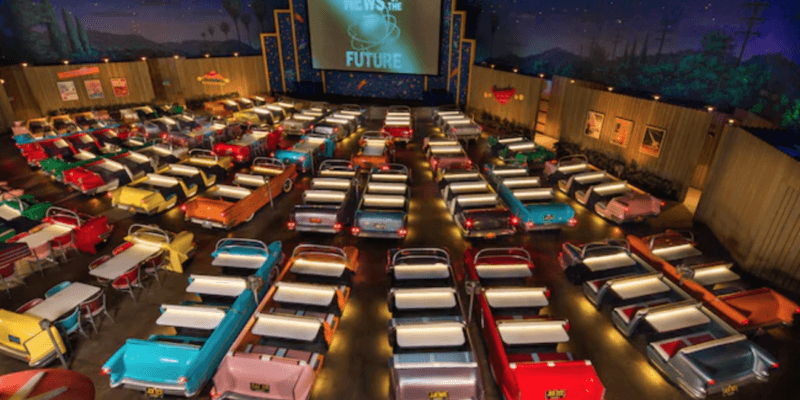 If you love dining at Disney’s Hollywood Studios, you’re going to love the changes made at two of the Park’s most popular restaurants.

Disney Park Guests visiting Disney’s Hollywood Studios are treated to a plethora of thrilling attractions and experiences, including Star Wars: Galaxy’s Edge, but it’s not just the rides that are an intricate part of the Walt Disney World Resort theme park.

Whether you’ve been to Sci-Fi Dine-in Theater Restaurant before or have always wanted to drive into this retro classic, the new menu premiering June 2 is not to be missed. This “theater” is debuting some super tasty offerings including appetizers, entrées, and desserts. Start off your meal with the Sci-fi Smoked Wings tossed in a porter barbecue sauce with a house-made pineapple and poppy seed coleslaw or the Spinach and Artichoke Dip, a plant-based blend of spinach, artichoke, red peppers, cauliflower, cashew cheese, and oat milk served with house-made chips.

If you’re interested in some burgers, this new menu has got you covered. The Feature Film Burger – Surf & Turf is a unique twist on a classic with a signature blend of beef and house-made seasoning served on a brioche bun and topped with a shrimp and crab cake, pepper jack cheese, chipotle hollandaise sauce, grilled onions, heirloom tomato, arugula, and house-made vinaigrette. A previous “featured” item, the Pork on Pork Burger has been awarded a permanent spot on the new menu. This dish includes a grilled house-made pork patty topped with roasted pork belly, white sharp cheddar cheese, caramelized onions, cabbage slaw, and a house-made Carolina mustard sauce.

The grand finale of the meal, dessert, is also getting a revamp. The Red Planet is a delicious white chocolate cheesecake with blueberry compote on a graham cracker tart with a matcha sponge and gold candied pecans. How yummy does that sound? For a more tropical option, you have the Out-of-this-World Sci-Fi Swirl. This dish features a pineapple mousse with passion fruit cosmic swirl and a spiced lime spaceship garnished with space dust and blood orange coulis.

You better get the whole family together because it’s time for a good ole’ fashioned family meal at 50’s Prime Time Café. Step back in time with some of their new plates that bring TV dinner to a different level that feels just like home, beginning June 7. If you love a little kick to an adored dish, then you simply must try the Jalapeño Popper Deviled Eggs. On the other hand, if spice isn’t your thing, don’t worry, because there’s another classic starter for you – the Creamy Tomato Soup – yes, please! After you’ve enjoyed these tasty plates, get ready for a return that is here to make your taste buds very happy. Grandpa Jean’s Chicken Pot Pie has made its official return to 50’s Prime Time Café. This has a traditional pastry crust filled with chicken, potatoes, carrots, celery, onions, corn, and peas.

I hope you save room for dessert after these eats, because there are a few sweet treats making an appearance at this retro joint. The Pineapple Upside Down Cake features yellow cake soaked in pineapple juice topped with caramelized pineapples and maraschino cherries and garnished with whip cream and caramel sauce – wow! Also joining the menu is the Lemon Meringue Pie, a lemon curd in a flaky pie shell topped with a toasted meringue and garnished with a raspberry sauce. The sweets don’t stop there because there is also the Grasshopper Bar! This dessert is a mint white chocolate mousse with chocolate chips on a chocolate chip cookie and is topped with whip cream and chocolate chips. It is a mint chocolate chip lover’s dream.

And rounding out these exciting additions is the Stained Glass Dessert. This treat, made for the little ones, sees a whipped pineapple fluff studded with cubes of strawberry, lime, and orange gelatin to look like stained glass.

What do you think of these new changes at Disney’s Hollywood Studios? Let us know in the comments!