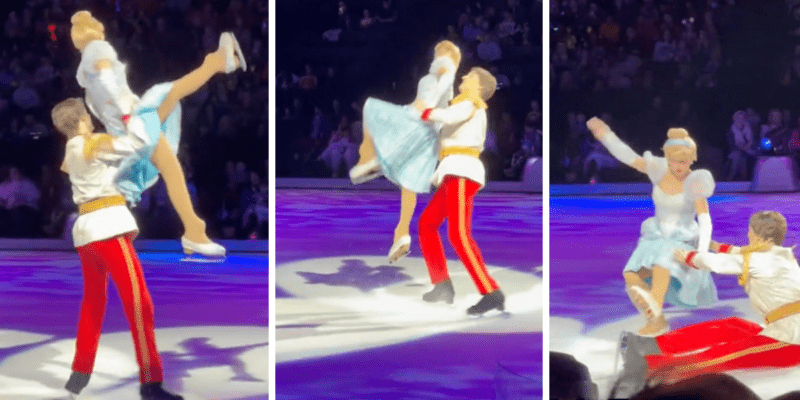 One of the most magical portions of a trip to Walt Disney World Resort or Disneyland Resort is meeting all your favorite Disney characters.

From Mickey Mouse, Minnie Mouse and their friends to Disney princesses to Disney Pixar characters and much more, characters bring the Disney Parks to life and allow Guests an opportunity to interact with their beloved icons.

There are more ways to experience the Disney magic, however, than just at the Disney Parks.

Disney On Ice brings all your favorite characters to your hometown for a chance at seeing a one-of-a-kind show that includes Disney magic and plenty of exciting and athletic stunts.

That doesn’t mean that everything always goes exactly as planned, though.

TikTok user @consistently_curi recently posted a video of a Disney On Ice event where we saw Cinderella and Prince Charming have a bit of a misstep.

As you can see in the video above, it seems both Cinderella and Prince Charming lost their balance when attempting to perform an aerial stunt. As a result, they both took a fall. But, you have to give both Disney Cast Members credit. They got back and seamlessly continued their routine as if the fall never happened.

Grab your Mickey ears and get ready for non-stop fun when 50 of your favorite Disney friends come to life through world-class ice skating.

Have you ever seen a mishap like this at Disney On Ice or at the Disney Parks? Let us know in the comment!