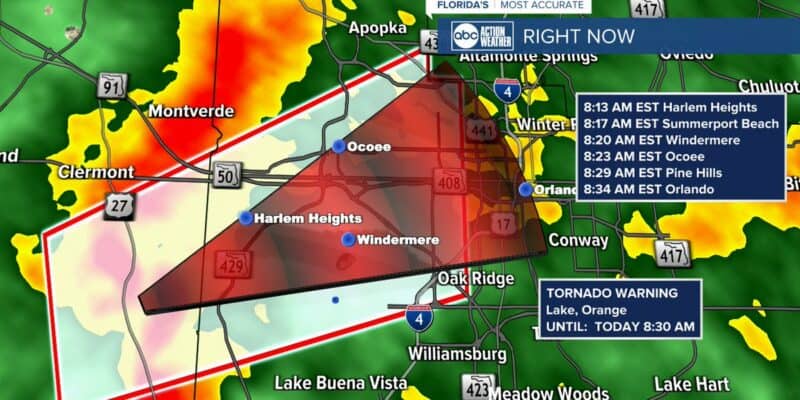 Walt Disney World Resort was under the threat of a tornado through 8:30 a.m. on Sunday, January 16, 2022. The threat was tracking over the north and west side of the Disney area, working its way towards Universal Studios, Florida. Although the intense rain has now subsided, the intense storm was a wake-up call (literally) for many vacationers in the area.

On the west side of Orlando, near Lake Louisa, ABC viewers had seen a visible funnel down near Clermont, and the Weather Channel warns of strong showers and thunderstorms impacting portions of Seminole, northwestern Okeechobee, east-central Lake, northwestern Brevard, Orange, Volusia, and Osceola Counties through 9:30 a.m.

Pro meteorologist, Greg Dee of ABC News, is continuing to track the storm through the Florida area.  His Twitter account, @GregDeeWeather, commented on the recent tornado threat, saying,

TORNADO WARNING | Orlando metro until 8:30 am. This one is radar indicated and is tracking over north side of Disney property and toward Universal Studios as well as downtown Orlando. #flwx #tornado #disney #orlando

TORNADO WARNING | Orlando metro until 8:30 am. This one is radar indicated and is tracking over north side of Disney property and toward Universal Studios as well as downtown Orlando. #flwx #tornado #disney #orlando pic.twitter.com/4hjIAoAkC0

While Disney World is no stranger to harsh weather, with lightning storms continuously pausing outdoor attractions, closing the theme parks due to hurricanes and other such issues, but, those who live in the area always pay attention to severe weather threats. While Walt Disney World rarely sees snow (like that being thrown by nearby winter storm Izzy), that particular cold precipitation is a scarce Southern treat.

Stay tuned for any more weather threats in the area with Inside the Magic. If you would like to plan a magical vacation to possibly see various forms of southern precipitation, call on the professionals at Academy Travel. They can surely get you into the summer hurricane season (or help you avoid it!), which reaches from June to November.

Did you see any of this severe weather? Leave us a comment below!