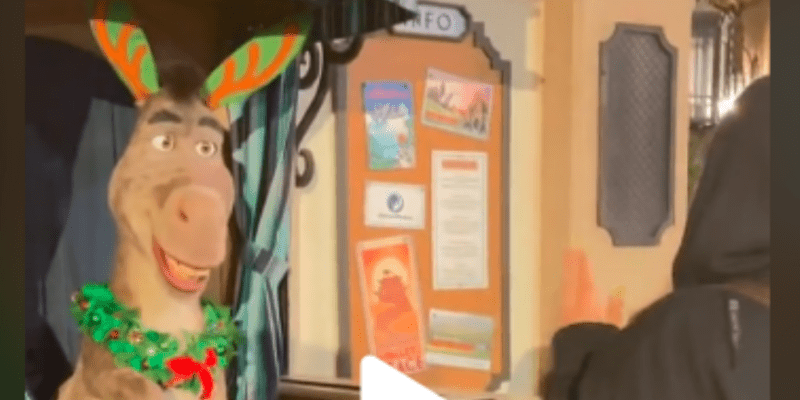 Guests who visit the Parks are able to meet with the popular character from the Shrek franchise, ask him questions, and get unique responses.

TikTok user maira.javed (@Mairajavedw) shared an interaction they had with Donkey at Universal Studios Hollywood and wrote:

Donkey was asked if he knows BTS, the popular Boy Band that is renowned worldwide, and immediately busted out into song. He sang a couple of bars of the song “Butter” and Guests cheered the performance.

After, Donkey talked about the band and their performance on The Late Late Show with James Corden, showing us that he still has time to catch some television despite a busy schedule meeting with Guests all day at Universal.

In addition to his meet and greet, Donkey can also be found with fellow characters Shrek and Gingy in the preshow at the DreamWorks Theatre.

Get ready for another level of awesomeness at DreamWorks Theatre Featuring Kung Fu Panda, now open. Discover the all-new multi-sensory attraction using state-of-the-art visual effects and cutting-edge technology, including the first-ever interior projection mapping, 360 surround sound audio and sweeping physical effects, to engulf you in a world of adventure. Join Master Po and more from DreamWorks’ blockbuster franchise on a thrilling journey of awesomeness destined to stimulate your senses, exercise your wit and unlock the hero within through the power of kung fu.

On the east coast, Universal confirmed that Shrek 4-D would be closing permanently in January 2022. While the ride will be closing, the meet and greet with Donkey will stay intact meaning that Guests at both Parks can still interact with their favorite furry friend.

Have you visited with Donkey at Universal Studios Hollywood or in Orlando?