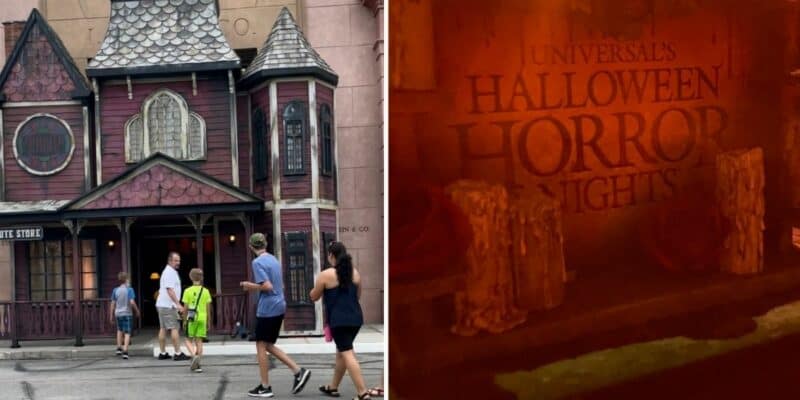 The tribute store was evacuated on September 22 after an alarm began ringing in the store.

Yesterday evening, we even saw Puppet Theater, one of the ten houses at Halloween Horror Nights filled to capacity. During the evening, there was heavy rain, which caused one of our readers, Andrea C., to head into the Halloween Horror Nights tribute store. In case you have not entered, the Tribute Store is themed to a classic haunted house. The store has multiple rooms, which are all different sections of the home.

The entryway is full of other trinkets and will look like the interior of a classic haunted house. This is meant to greet Guests. Next, Guests will enter the Icons room, which has all of the past Halloween Horror Night Icons. Afterward, Guests walk into the green room, which has heavy Beetlejuice theming. They then move into an outdoor stable filled with snacks from the event.

Andrea noted that around 9:00 p.m., she and her party went into the Tribute Store as it began to rain. Shortly after, the fire alarm began to sound. Andrea said that Guests were not made aware as to why the alarm went off, but they were able to re-enter the store later in the night.

Team Members helped escort Guests out of the building, as it was quite crowded with Guests taking shelter from the rain. She did note that there was heavy fog which she thought set off the alarm; however, that was not confirmed, and since the house typically has fog, it may have been due to another reason.

Luckily, no Guests seemed to be injured, and the store was fully operational later in the evening! Although Halloween Horror Nights is a separately ticketed event, Universal Studio Florida Guests are able to visit the Tribute Store during daytime hours.

Have you been to Halloween Horror Nights? Do you plan to attend?

Comments Off on Alarms Sound as Universal Evacuates Guests From Store