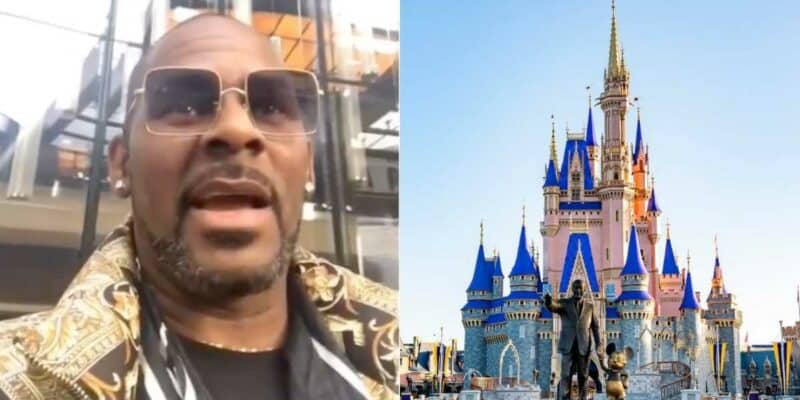 Disgraced singer R. Kelly is currently in court facing charges that could see him sent to prison for many years. Allegations of sexual abuse have surrounded Kelly throughout his career and this week saw the opening days of his sex crime trial in Brooklyn.

Opening statements began proceedings — where the singer faces numerous charges — with Kelly being described by federal prosecutors as a predator who “used his money, his clout, and his public persona to hide his crimes in plain sight.” From the first couple of days of testimonies, information has come to light regarding the historic allegations of Kelly’s predatory behavior, with the Walt Disney World Resort being cited in at least two victim reports.

R. Kelly rose to fame in the ‘90s and through the 2000s with a slew of chart-topping R&B and hip hop records. Known for singles like “I Believe I Can Fly”, “Ignition (Remix)”, and “The World’s Greatest”, Kelly was one of the most successful music artists in history.

Allegations of sexual misconduct and other illegal activities began in the late ‘90s with incidents of inappropriate behavior and alleged sexual activities with underage girls. Following the Lifetime documentary, Surviving R. Kelly (2019), which brought together numerous victims of Kelly, he was arrested on multiple charges. The BBC outlines the current situation and charges against the former star.

In July [2019], Kelly is hit with two separate federal indictments in Illinois and Brooklyn.

Combined, the allegations depict an organised effort from the star and his associates to recruit and transport underage girls over state lines for illegal sexual purposes, including the production of child pornography, as well as conspiracy to obstruct justice by destroying evidence and bribing or threatening witnesses.

Back in 2019, Kelly’s receipts for the Walt Disney World Dolphin Hotel (a hotel that is not owned or operated by Disney, but rather by Marriott International, though it is located at Walt Disney World Resort and is considered an official Disney hotel) were obtained to use in legal proceedings. Following a victim testimony this week, information has been revealed of what happened at the hotel.

The woman testified that she first met Kelly when she was 17, after one of his employees gave her his number at a tour stop in Orlando, Florida, in April 2015.

She texted and FaceTimed with Kelly after the concert, hoping he could critique her work. The woman testified that she falsely told Kelly she was 18 years old in those messages and, at his behest, agreed to meet him for an “audition” at the Walt Disney World Dolphin Hotel in Orlando.

The report goes on to detail the alleged sordid behavior of Kelly’s sexual exploitation during the underage girl’s visit to his hotel room. At one point police officers arrived at the room after the alleged victim’s parents couldn’t reach her on the phone.

She testified that while she told the officers she was 18, she handed them her ID card, which showed her actual date of birth.

They reportedly then told the singer: “Any time he was back in Orlando and needed security to give them a call”. The woman is just one of many victims that will be testifying at the trial in Brooklyn, which is said to last around four weeks.

Another of Kelly’s accusers comes in the form of one of his previous managers, Tom Arnold, who claims that Kelly once docked his entire paycheck for not securing a female tour guide while visiting Walt Disney World in Orlando, Florida.

Arnold’s breaking point was after the Disney World trip, in 2011, he said. He had been tasked with booking hotel rooms and a female tour guide for the trip. But when he called Disney, only male tour guides were available, he was told. When Kelly’s tour bus rolled up to the park, the singer saw the male tour guide and erupted, Arnold said.

Kelly allegedly enacted Arnold’s punishment by refusing to pay him anything.

A few days later, Arnold’s wife called him. His paycheck had arrived in the mail. Taxes had been taken out, but the remaining balance he was paid was $0, Arnold said.

At this time, Walt Disney World or any Disney officials have not commented on the allegations revealed in the victim testimonies at the Brooklyn federal court case, and neither has Marriott International or Sheraton Hotels and Resorts, which operate the Walt Disney World Dolphin Hotel.

The case is ongoing.