Pluto and Goofy Tear the House Down with a Never Before Seen Performance! - Inside the Magic 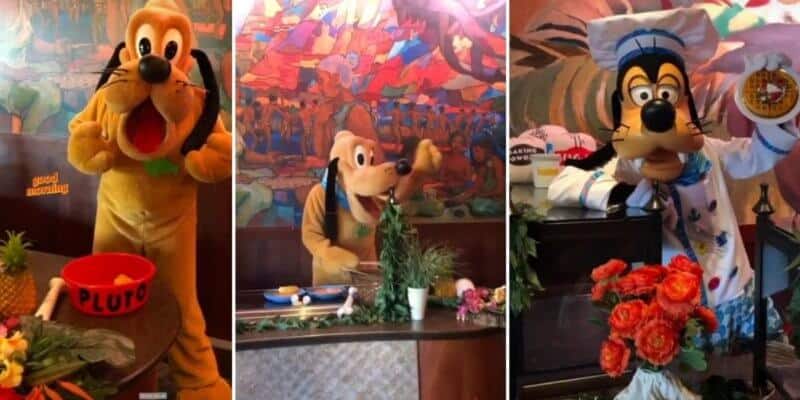 When it comes to Disney magic, Character Dining Experiences are where it’s at! There’s no need to get in a massive line at the parks to take a picture with Mickey and Minnie Mouse. Guests who visit Disney theme parks and resorts make it a habit of reserving table service restaurants months in advance just for that interaction with some classic and sometimes never before seen characters.

This year, we’ve seen many of our favorite Character Dining Experiences return, some with modifications and still enforcing social distancing. But it doesn’t mean they still aren’t worth experiencing.

Recently, at Aulani, A Disney Resort and Spa in Hawaii, Pluto and Goofy make some magic happen and show off some musical talents at Makahiki — The Bounty of the Islands buffet-style restaurant.

A big Mahalo (Thank you) goes out to @disneyhawaiimoms on Instagram, as we were able to see a rare sighting of Pluto and Goofy bringing the house down just behind the buffet tables. Now Guests can enjoy a full show from Disney characters while enjoying fresh local ingredients from the island. Check out Goofy’s hilarious dance moves and Pluto’s adorable drumming skills as they share,

Pluto and Goofy drumming up some fun!
@disneyaulani

A post shared by DISNEY MOMS FROM HAWAI’I? (@disneyhawaiimoms)

Disneyhawaiimoms also stated to us that as of now, no Characters are roaming around each table. Mickey and Minnie are at the entrance welcoming Guests inside (distanced from a stage) and Pluto and Goofy are seen hanging behind the buffet counters entertaining Aulani Guests from afar.

Right now, the Makahiki Restaurant provides a preset three-course breakfast and dinner and hosts Character Breakfast 4 days a week on Mondays, Wednesdays, Fridays, and Saturdays. Due to the pandemic, buffet-style dining is still suspended at Aulani, but we suspect that it will return soon.

Aulani, A Disney Resort and Spa, is seeing some positive changes this year as many events have returned, such as Disney’s Luau located inside the Resort, Character sightings around the Resort, and relaxing many restrictions in Hawaii.

Although Disney is doing their best in ensuring safety while providing Guest will the ultimate Disney experience, we cannot wait to be able to hug and high-five our favorite Disney Characters once again!

Have you experienced this Disney Character interaction recently? Which Disney dining experience are you wanting to return? Let us know in the comments below!

Want to go to Disney’s Aulani Resort and Spa and don’t know where to start? Let Academy Travel do all the work for you, plus they are EarMarked Diamond! Click the link for more information!

Comments Off on Pluto and Goofy Tear the House Down with a Never Before Seen Performance!