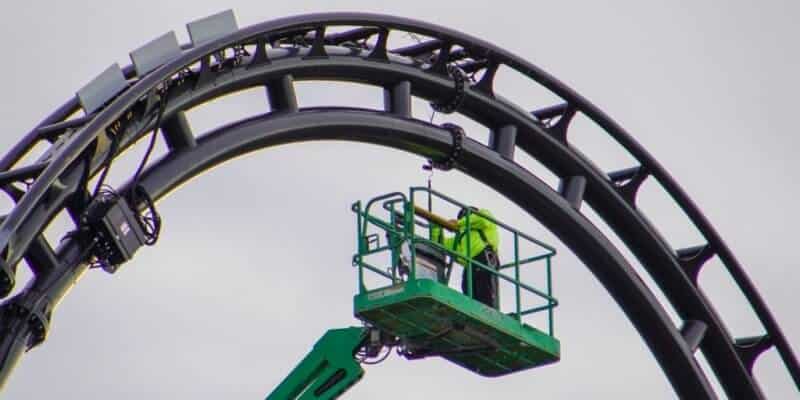 It has only been a few weeks of Jurassic World VelociCoaster beginning its soft opening in preparation for the grand opening on June 10 at Islands of Adventure. It seems that touch-ups are already being made.

Jurassic World VelociCoaster is the newest attraction at Universal Orlando Resort in the Jurassic Park section of the theme park. The Jurassic coaster allows Guests to enter InGen and ride through the raptor paddock in a rollercoaster attraction. The ride is meant to be a thrilling experience provided by InGen until Owen Grady (Chris Pratt) warns us that that Blue, Delta, Echo, and Charlie are all a little on edge and on the loose.

The attraction is already receiving rave reviews, as it is wild enough to make a Guest lose their hair! We’re not kidding about that; read more about a Guest’s wig flying off mid-ride here.

Although the ride is still brand new, touch-ups are already underway. Bioreconstruct (@bioreconstruct) has taken to Twitter to show off Universal Team Members adding new paint to the attraction. It seems that the wear and tear have already begun!

Touch up paint beneath the Osprey nest at Jurassic World VelociCoaster.

Touch up paint beneath the Osprey nest at Jurassic World VelociCoaster. pic.twitter.com/atwfFrctdX

Not only was some paint touched up, but it seems that the iconic Osprey nests, which were being formed on the top hat of the coaster during construction, continue to return.

If the attraction already needs paint touch-ups after a few weeks of operation, we will likely see a lot more of these in the future. Universal will likely want VelociCoaster to look as sleek as possible for the big opening on June 10, so the touch-ups could be in coordination with that.

Until June 10, Guests can ride VelociCoaster if the attraction is operating while they visit Islands of Adventure. As the ride is not officially open, there is no set schedule for the ride just yet, so it could close early and open late. Keeping an eye on the Universal Orlando App is a great tool to know when the coaster is running and how long of a wait it holds.

Have you been on VelociCoaster yet? Do you plan to join the hunt in the future?