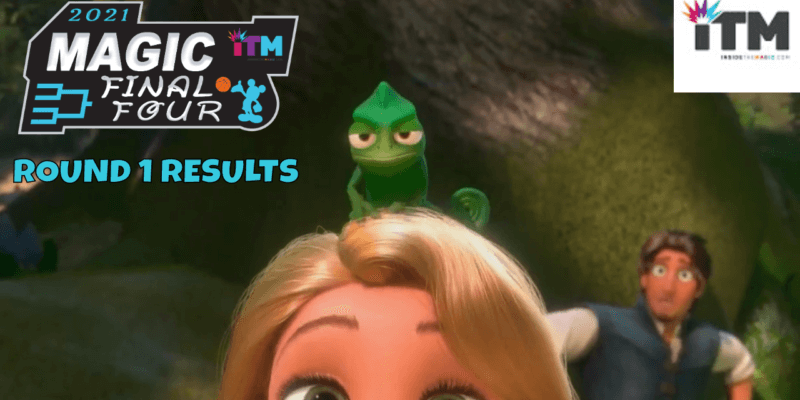 Round 1 has come and gone and Magic Final Four’s field of 64 movies has been cut in half.  With over 10k votes coming in from all across the globe, the majority of our matchups went the way many had predicted, with the higher seed advancing to the next round.  In fact, there were only 3 upsets out of the 32 first-round games! Let’s break down what stood out from your votes in Round 1.

It can be argued that Ratatouille should’ve been ranked higher than Bambi to begin with, so calling this game an upset is a bit of a reach.  There’s no denying that Remy is benefitting from the momentum generated by the Ratatouille musical on Tik Tok.  Unfortunately, The Lion King is awaiting in Round 2, so the end is likely near.

Lilo & Stitch taking down Dumbo isn’t a true shocker either.  Some would look at the film as the peak for Disney animation in the dark age that was the early 2000s.  Hawaiian Roller Coaster Ride is a modern-day classic so I have no problem watching the little alien bust his way into the 2nd round.

The true upset of the tournament comes by way of the Incredibles, and Incredibles 2 specifically.  Heading home early is Hunchback of Notre Dame, which suffers from a small fish/big pond situation.  Sandwiched by Pocahontas & Hercules, the Paris-based film can often be overlooked when examining the Disney renaissance of the 1990’s.  Incredibles 2 did a great job holding its own as a Pixar sequel while earning rave reviews from fans and critics alike.  It wouldn’t shock me if Helen & Bob ended up eliminating the legendary Peter Pan in the next round.

Aladdin garnered more votes than anyone in the tournament, and the 1992 film is my personal pick to win the whole thing.  Keep your eyes open for a potential Tangled vs. Aladdin showdown in the Sweet 16.

To the surprise of absolutely no one, Lion King annihilated Meet The Robinsons in the 1st round. After losing in the Championship last year to Beauty & the Beast, I don’t see anyone putting up much of a fight until the Elite 8, where it’ll likely have to face The Little Mermaid or Hercules.

Toy Story wiped out Treasure Planet with ease by a score of 91%-9%.  The original Pixar film set the tone for the studio while laying the groundwork for three critically acclaimed sequels.  Mulan awaits in Round 2 after beating Jungle Book.

Voting continues in the 2nd round this Wednesday following Episode 3 of Magic Final Four. Join us Wednesday for the Round 2 preview show with interviews and analysis of the upcoming matchups.

What result surprised you the most? Let us know in the comments below.

Comments Off on Magic Final Four – Round 1 Results