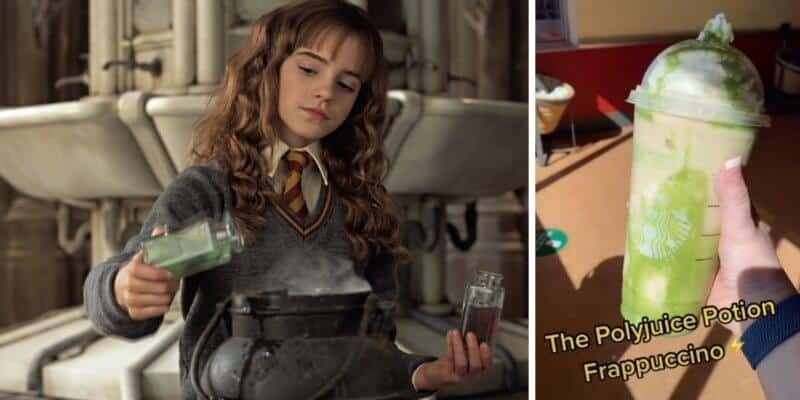 One of the most hated classes at Hogwarts was undoubtedly Potion, but not because the subject was boring. Actually, it was a very useful and essential skill for any wizard or witch. Yet, in the Harry Potter universe, the reason why most students disliked potions was  because of the mean and unpleasant professor who taught the class, Professor Severus Snape.

If having to endure Snape meant that you could learn how to brew some interesting potions like amortentia (AKA love potion) or even some useful ones like the Boil-Cure potion, it was worth it. And, if you managed to become really specialized in potions, you might even learn how to brew a Polyjuice Potion!

Well, in the muggle world, brewing potions like the ones in the wizarding universe is not possible, but that doesn’t mean people can’t get inspired by them. This was the case with the girls from the TikTok account @targetcafe.2113. In a recent video, they taught their followers how to make a Polyjuice Potion inspired Starbucks Frappuccino!

Like in their video, we will show you how to prepare — or order — your very own Polyjuice inspired frappe.

For the base of the drink you will add:

Now, to make the green syrup, here is what you will need:

After both parts are ready, it is time to finish up your drink.

What is a Polyjuice Potion?

In the Harry Potter universe, the Polyjuice Potion was a very complicated and advanced potion that allowed the wizard or witch who drank it to transform themselves into another person for one hour. In order to be transformed into someone else, the wizard preparing the potion had to include a piece of the person they wanted to turn into!

In the Movies and Books

In book and film Harry Potter and the Chamber of Secrets, Hermione Granger spent almost a month brewing the Polyjuice Potion so that she, Harry, and Ron could transform into three Slytherin students in order to find out if Draco Malfoy was the heir of Slytherin.

The Polyjuice Potion in action was next seen in Harry Potter and Goblet of Fire. After the end of the last task in the Triwizard, Harry, Hogwarts headmaster Dumbledore, Professor Snape, and Professor McGonagall found out that the death eater, Barty Crouch Jr., was transforming himself into Professor Alastor Moody (AKA Mad-Eye Moody).