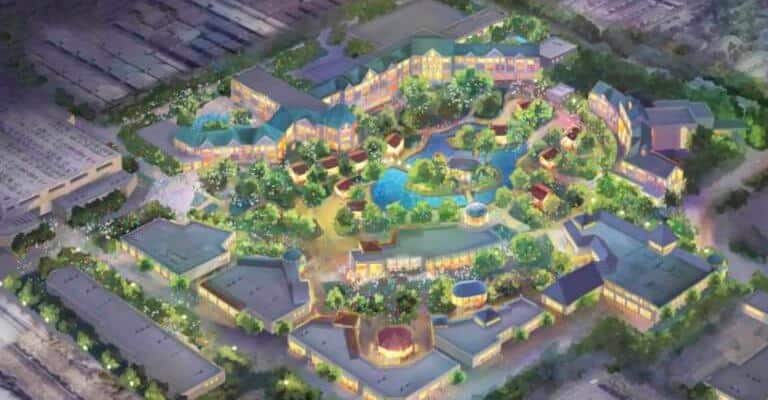 With the recently proposed expansion project for the Disneyland Resort — known as DisneylandForward — there has been a lot of speculation about what Disney is dreaming about.

DisneylandForward is the official name of all the ideas and possible changes coming to Disneyland Resort in the next several years. Although none of these proposals have been approved just yet and Disney will continue discussions with the City of Anaheim to hopefully reach an agreement, we noticed one change that might be huge for Southern California — the addition of a Disneyland version of Disney Springs!

With DisneylandForward, Disney announced that they want to add more magic to Southern California’s Disneyland Resort.

Disneyland Resort President Ken Potrock said, “Thinking big and leading the way is both our legacy and our best path forward. Now is the time to be bold, to dream, to believe, and to lead! The world-renowned Disneyland Resort is poised to bring back jobs to our community as well as new entertainment and experiences to loyal fans and new audiences for generations to come.”

After reviewing the DisneylandForward website, we noticed that Disney shared the following regarding the possibility of transforming the Toy Story parking lot (near the Anaheim Convention Center) into “a new kind of Disney entertainment destination” inspired by Disney Springs:

This property could be the perfect location to cater to locals, conventioneers, hotel and Disneyland Resort guests with restaurants, hotels, live music, shopping, ticketed shows and theme park experiences modeled after the popular Disney Springs at Walt Disney World Resort.

This gives our Disneyland lovers so much hope as the website features images of Guests walking through Disney Springs with the ever-popular Jock Lindsey’s Hangar Bar in the distance.

This particular project within DisneylandForward is called “a new kind of Disney entertainment.”  Below, we can notice that the map of the Disneyland Resort property in Anaheim includes a sketch of “a new kind of Disney entertainment.” Where the Toy Story lot currently stands, we notice an area with ponds and building structures that slightly resemble the Disney Springs area in Walt Disney World.

If this plan is approved by the City of Anaheim and it does become reality for Disneyland Guests, a California version of Disney Springs will only be a short walk (10-20 minutes, depending on your pace) from the Disneyland and California Adventure theme parks.

Related: Everything We Know About The Disneyland Expansion

Disney SpringsThe Walt Disney World Resort seems to have it all, and Disney Springs (formerly known as Downtown Disney before it was reimagined and expanded) is another world of its own, with 100 shops, 64 dining options, and 22 entertainment offerings, depending on the time of year. If you’re not a theme park person or you want another atmosphere to explore while you’re on vacation, this may be the place for you.

Another thing to note is that at Walt Disney World, Disney Springs is free to enter and does include free parking. Although Disneyland resort does have Downtown Disney as their shopping and dining experience, it is much smaller and does not compare to the amenities Disney Springs offers.

Having a more upscale shopping, dining, and entertainment district like Disney Springs on the west coast could help Disney Guests who live in California, instead of traveling all the way to Orlando, Florida to experience it, and it would also promote even more jobs for existing and new Disney Cast Members. We predict that Disneyland Resort fans and visitors would love to have a beautiful Disney Springs-like atmosphere in Anaheim, especially if it features world-class offerings curated by Walt Disney Imagineering.

As of this week, we know that Disney will continue discussions with the City of Anaheim, and it will be years before any of these dreams become a reality. All we know right now is that we are super excited to see if DisneylandForward is approved and we can’t wait to dream big alongside them.

What do you think of these proposed plans for Disneyland Resort? Do you hope Southern California gets its own version of Disney Springs? Let us know in the comments below!