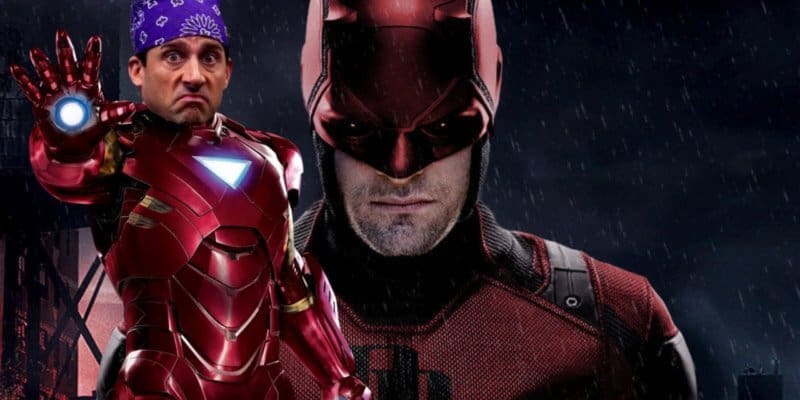 If there are two things this writer loves, it’s the MCU and The Office. Both worlds are completely difference from each other, but boast huge franchises with epic fandoms. Sometimes, the saying that opposites attract can prove true — or at least it did for this Marvel x The Office fan.

Reddit user thechevybandit posted a scene from the retired Marvel show Daredevil which features the titled character himself, also known as Matt Murdock. In the scene our Daredevil is jumping across buildings but the audio sounds a little different than the show. If you have ever seen Season 6, Episode 1 of The Office (and no, I did not have to look that up) you may recognize the intro where Michael Scott (Steve Carrell), Dwight Schrute (Rainn Wilson), and Andy Bernard (Ed Helms) attempt to ‘parkour’. The hilarity in the episode is that parkour-ing is a very talented and athletic sport, whereas the trio are lying down, jumping, and simply just running around yelling parkour.

Matt Murdock, however, does seem to be doing a form of parkour in the below scene, but his voice has been dubbed with Michael Scott’s famous ‘parkour’ line. Take a listen below!

Daredevil but every time Matt Murdock jumps, Michael Scott from The Office says, "Parkour!" from marvelstudios

Both Daredevil and The Office are currently no longer on air, but that clearly doesn’t mean the popularity is gone. Plus Charlie Cox who plays Daredevil is not only having his character cross-over into the She-Hulk Marvel series, but comicbook.com also reported that, “Cox’s version of the character had joined the ever-growing cast of Marvel Studios’ upcoming third Spider-Man movie, joining an impressive roster of actors from previous Marvel movies.” Just when we thought Avengers: Endgame was the biggest Marvel movie…

In terms of The Office ever having a spot in the Marvel Cinematic Universe, that really doesn’t seem likely, especially not for Steve Carell’s Michael Scott, but it is fun to think of it as a possibility. Stay tuned to Inside the Magic if you want to learn about all of the new Marvel television shows and movies that are slated for theaters and Disney+!

Would you want to see a The Office x Marvel crossover?