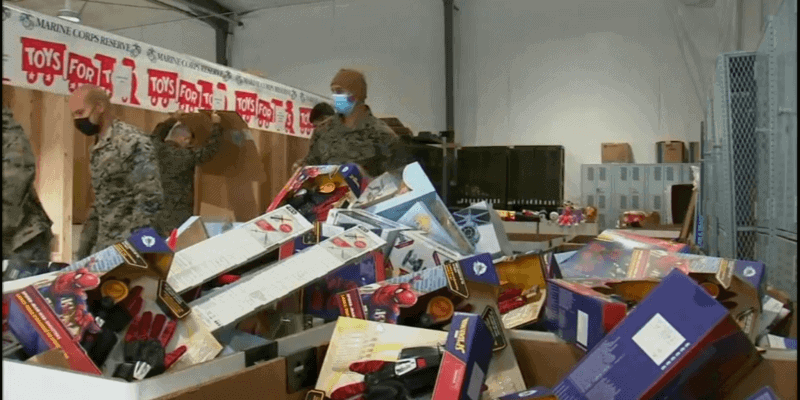 ‘Tis the season for giving and Disney is getting in on the holiday action! Disney recently donates 1,000 toys to Toys for Tots!

According to ABC News 7 New York, Disney will be donating to each news station that they own for Toys for Tots:

Marines in Brooklyn sorted through the huge donation of goodies, but the kindness didn’t stop in New York City.

Each Disney-owned news station in the country had a hand in delivering toys to their local Toys for Tots campaign.

They go on to encourage those who want to help Disney in their effort of giving this season. From now until this coming Sunday, December 13th, Disney will be making an additional dollar donation for the purchase of new toys on shopDisney.

Even Disneyland is getting n on the giving action! On the Disneyland Cast and Community Instagram, they shared that they are have been collecting toys for the Toys for Tots organization.

Our team at Downtown Disney District has been busy collecting toys for the Toys for Tots drive. Only a few days left to make a donation at World of Disney or on shopdisney.com/toysfortots. Disney will donate $1 to Toys for Tots for every new, unwrapped toy donated until Dec. 13.

If you want to donate to Toys for Tots, of course, you do not have to donate through Disney. The Toys for Tots website has information on all ways you can help bring a little cheer this Christmas.

Did you know Toys for Tots has been around since 1947? Here is more information on this incredible orginization:

Local toy collection campaigns begin in October and last until mid to late December.  Toy distribution also takes place mid to late December.  Members of the community drop new, unwrapped toys in collection boxes positioned in local businesses.  Coordinators pick up these toys and store them in central warehouses where the toys are sorted by age and gender.  At Christmas, Coordinators, with the assistance of local social welfare agencies, church groups, and other local community agencies, distribute the toys to the less fortunate children of the community.  Over the years, Marines have established close working relationships with social welfare agencies, churches and other local community agencies which are well qualified to identify the needy children in the community and play important roles in the distribution of the toys.

Will you be donating to Toys for Tots this holiday season? Let us know in the comments below!

Comments Off on Disney Donates 1,000 Toys to Toys for Tots!