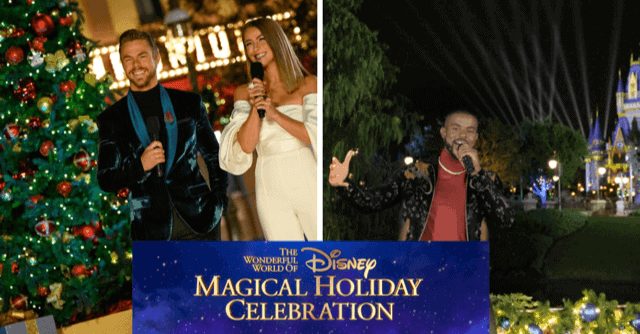 The holiday season has arrived at Disney Parks around the world and to celebrate Disney and ABC are bringing The Wonderful World of Disney: Magical Holiday Celebration to viewers this Thanksgiving!

Returning to ring out the holiday season at the Disneyland Resort are hosting duo Derek and Julianne Hough (Dancing with the Stars). Over at Walt Disney World, the holidays are in full swing and grown-ish star Trevor Jackson will be our host on the east coast.

The Magical Holiday Celebration takes viewers on a tour of the parks with exclusive first-looks and sneak peeks of what we can expect from the parks in the following year. This year, we will get an exclusive look at EPCOT’s Remy’s Ratatouille Adventure that will be opening next year in the France Pavilion.

Viewers will also get a sneak peek into Disney and Pixar’s newest film to come to Disney+ this holiday season, Soul.

Take a look at what else we can hope for during this holiday special below.

The Wonderful World of Disney: Holiday Celebration will air on ABC this Thanksgiving night at 9/8c.

Will you be watching the Holiday Celebration? Let us know in the comments!