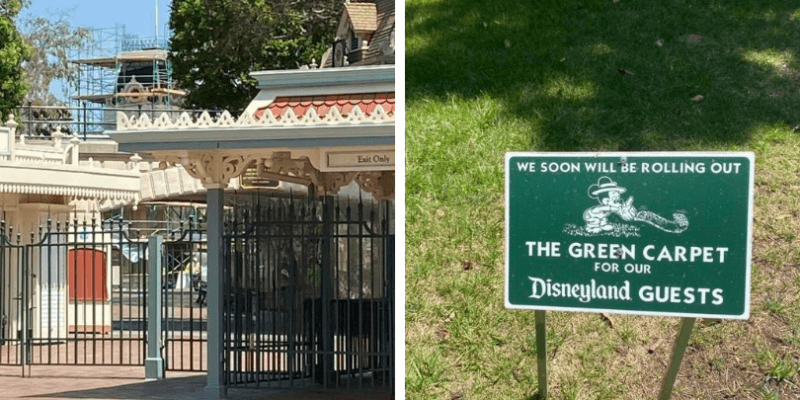 More information is starting to reveal itself about the reopening of Disneyland theme parks as California Governor Newsom announced a four tier plan last Friday called the “Blueprint for a Safer Economy.” He also mentioned that he would have a meeting that afternoon that would involve discussions on the reopening of California theme parks.

Construction at the Emporium

A couple of weeks ago, some refurbishment scaffolding was seen on the Emporium at Disneyland Park at the same time as some Cast Members were spotted installing more plexiglass at the park entrance turnstiles. It’s a lot more work than has been seen at the Disneyland theme parks over the past few months as it nears an almost six months since the temporary closure of Disneyland and Disney California Adventure. So it looks like there is more of an abundance of work being done to prepare for reopening, if it could happen soon.

Since City Hall and the Emporium are so close together, one could think that construction was actually taking place at City Hall. But it’s actually at the Emporium! Near the Emporium, the Disneyland Park City Hall on Main Street U.S.A. is the home of one of the Guest Relations spots around the parks, and the spot you go to when you need help with your visit. As Disneyland says, “Get answers to your Disneyland Resort questions, help with reservations and much more.”

Today, the scaffolding was still up around the Emporium as Disneyland continues their refurbishment. From the Disneyland App, you can see that City Hall (located on the same site of the Emporium) will now also be the home of a Hand Sanitizer Location, one of many that are being implemented around the parks.

Landscaping Around the Disneyland Hotel

City Hall isn’t the only project that is happening at the Disneyland Resort right now in preparation for welcoming back Guests. The heat wave that has been happening in Southern California hasn’t been too friendly to the greenery around the Disneyland Hotel. Therefore, Cast Members will be working soon on “rolling out the green carpet” to bring some magic back to life on property. Signs are leading to a potential reopening soon that Disneyland goers are keeping their fingers crossed for!

Comments Off on Disneyland Continues Projects to Prep for Reopening