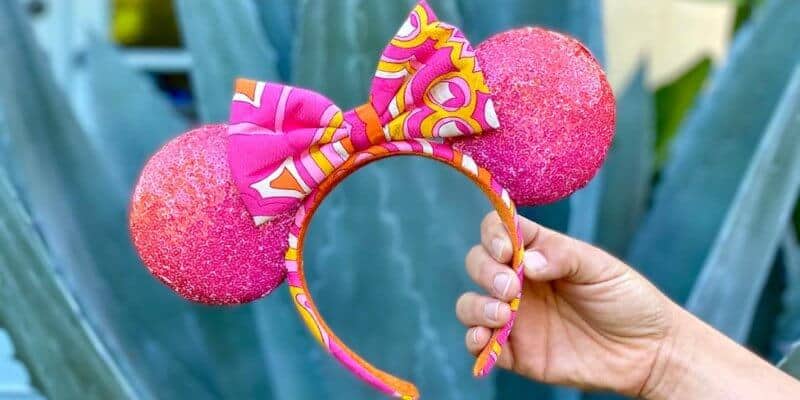 Are you ready to add a little extra sparkle to your Disney style? Well, get ready because Disney is about to premiere their newest and sparkliest Minnie Mouse ears yet–the Trina Turk ears!

These new ears are part of the Disney Parks Designer Ears Collection and will be premiering on the shopDisney website tomorrow, July 11, at 7:00 a.m. Their design features padded sequin ears colored in pink and orange with a groovy headband and bow with a swirled design in similar colors.

For those who are not familiar, Trina Turk is a fashion designer, philanthropist, and is known for contributing generously to arts, education, and architectural preservation causes. She is most known for her fashion line Trina Turk, which offers a range of women’s ready-to-wear clothing including accessories, plus swimwear, eyewear, and paper goods.

If these sparking Minnie Mouse Ears pique your fancy, make sure to also check out these other shimmering ears from the Disney Parks Designer Ears Collection!

Last year, supermodel Heidi Klum premiered her own pair of Disney Parks Designer Ears and they are shining, shimmering, splendid! The ears feature more than 150 sparkling Swarovski crystals and were only made in limited edition. Each pair ran for $600.

2019 was also the year of ALEX AND ANI’s own addition to the Disney Parks Designer Ears Collection with this stunning pair of golden ears. The ears feature two flat ears designed in gold metal, accompanied by a similar metal bow and headband, which are topped with the most adorable little golden heart.

The ears debuted in a limited release and are still available for purchase on the shopDisney website for $178.

Will you be waking up tomorrow morning at 7:00 a.m. to get yourself a pair of these Trina Turk Minnie Mouse Ears? Let us know in the comments!