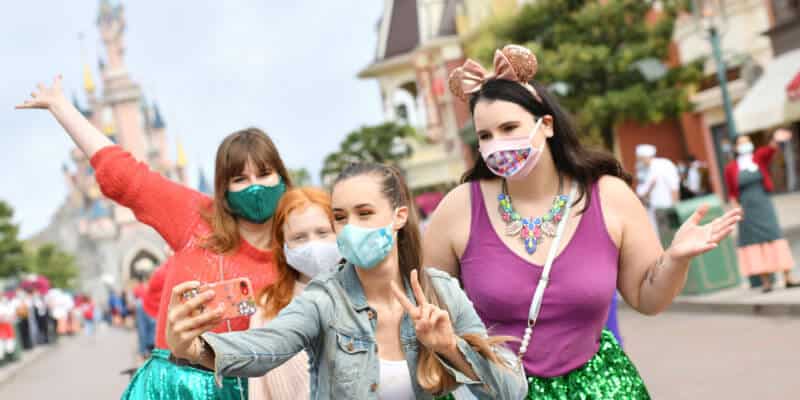 Over the past couple of days, Annual Passholders were allowed early access experience the new kind of Disney magic similar to what we’ve seen over at Walt Disney World last and this week.  With Disneyland Paris reopening to the public today, this spark of joy and light had fans excited to visit the Disneyland Paris Park that had been closed for over 100 days.  Through social media, we’ve been fortunate enough to see the Guests reacting to their first day back at the park.

Today’s reopening included a reopening ceremony that was seen at quite a few of the other Disney Park reopenings as well.  The day kicked off with an announcement from Disneyland Paris President, Natacha Rafalski welcoming back all the Guests to enjoy the magic in the parks.  She says, “Welcome back to the place where magic gets real.”

Here is Disney’s statement about the reopening today at Disneyland Paris with new health and safety measures.

Some experiences have been reimagined, some provide a new way for guests to be part of the magic, and some will be temporarily unavailable and return at a later date, but the timeless magic and unique storytelling for which the resort is known will remain.

The reopening of Disneyland Paris is also a chance to continue the resort’s ongoing commitment to support the local communities. Together with Disney VoluntEARS, in August the resort will welcome 300 children from the Île-de-France region and their families to experience a day at Disneyland Park during their summer holidays. Additionally, the resort made several donations to the local community over the past few months, including food and medical-related supplies and the planting of thousands of flowers to recognize and honor local hospital staff.

Click here to book your next Disney vacation so you can visit Disneyland Paris and the other Disney Parks!