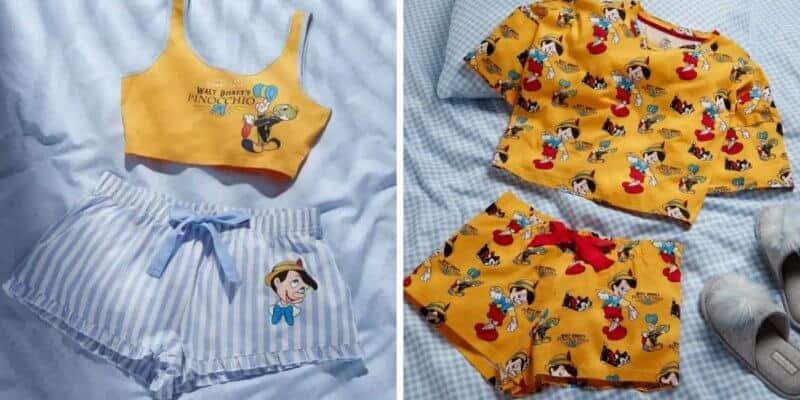 In 1940, The Walt Disney Company released its animated classic Pinocchio. For decades now, the film remains a favorite amongst Disney fans. And not to mention, some of the cutest merchandise out there features our favorite characters from the film including Pinocchio, Figaro, Cleo, Geppetto and others.

And now, Disney fans can get excited because Primark has just launched a new Pinocchio loungewear line and it is absolutely adorable.

The first of three pajama sets include a mustard cami crop with blue and white striped shorts. The top features Jiminy Cricket with the words “Walt Disney’s Pinocchio” across the front. The shorts feature blue and white stripes, a blue waist tie and a photo of Pinocchio’s face on the side.

The mustard cami top goes for £7 and the striped shorts are £6.

Related: Pet Owners are Going Crazy Over this New Line of Disney Gear from Primark

Hanging out at home with some of our Disney faves ? #PrimarkXDisney #PJs

The second loungewear set, which Primark posted about on their Instagram page, features Pinocchio himself along with Figaro and Jiminy Cricket all throughout both the top and shorts. This set goes for just £8!

Fans absolutely love this pajama set as comments on the Instagram post read “I bought this one some weeks ago. Really comfy” and “I need these in my life!!”

The last set includes long loungewear pants that showcase Pinocchio all over with an adorable t-shirt which includes the words “I may have told you a small white lie” with Pinocchio front and center.

The pajama bottoms go for £8 and the Pinocchio t-shirt is £12.

It looks as though right now the new Pinocchio loungewear line is only available in the United Kingdom and starts as low as £4.

Which one of these Pinocchio loungewear sets will you be purchasing? Let us know in the comments.