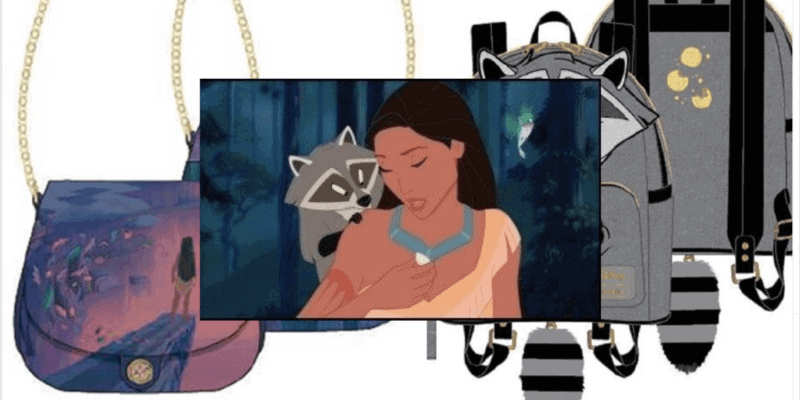 If you were a kid in the 90s, the soundtrack to Disney’s 1995 Pocahontas animated movie probably played a big role during your childhood. Who didn’t run through the house singing “Colors of the Wind” at the top of their lungs?

Another sneak peek at an upcoming @loungefly collection! The Meeko backpack may be the cutest thing ever! #disneybag #disneybackpack #meeko #pocahontas #disneypets #loungefly

Now, Loungefly is here with a new Pocahontas bag collection and the nostalgia is real! There are three bags in the upcoming Disney Loungefly series: a Pocahontas purse, a Meeko backpack, and a Meeko wallet or cosmetic case.

The purse is beautiful, with a watercolor-inspired background reminiscent of the “Colors of the Wind” scene in the animated feature film. The front of the satchel bag features a gold-tone snap closure and a back view of Pocahontas standing on a cliff amid swirling leaves.

The back of the Disney Pocahontas purse features the front view of the Native American princess. It appears that the new Loungefly bag features an exterior back pocket and it has the brand’s standard “Disney x Loungefly” plaque.

The most eye-catching feature on this Pocahontas purse is the gold-tone chain strap.

The smaller of the Meeko bags in the upcoming Pocahontas Loungefly collection looks likely to be a cosmetic case. The front flap opening features Meeko’s adorable face as he munches on one of his beloved biscuits!

The back of the Meeko bag has an exterior pocket with more crumbly, half-eaten biscuits. Another cute feature is the zipper charm.

The final item in the upcoming Disney Loungefly collection is a Meeko backpack. Pocahontas’s raccoon sidekick has something of a cult following and fans of the cute Disney character are sure to be obsessed with this bag! It even has a plush raccoon tail.

The backpack has all sorts of great details, including an embroidered Meeko reaching for biscuit zipper pulls! It also has an exterior zipper pocket, the same adjustable straps as all Loungefly backpacks, and a crumbly biscuit graphic on the back.

No dimensions are available for the Pocahontas collection yet. This three-bag series joins other new Disney Princess bags from Loungefly, including this classic Princess backpack featuring Cinderella, Snow White, and Sleeping Beauty and this Mulan backpack.

Which Pocahontas or Meeko bag are you most excited about? Tell us in the comments!

Comments Off on Forge a New Path With ADORABLE Pocahontas & Meeko Bags!