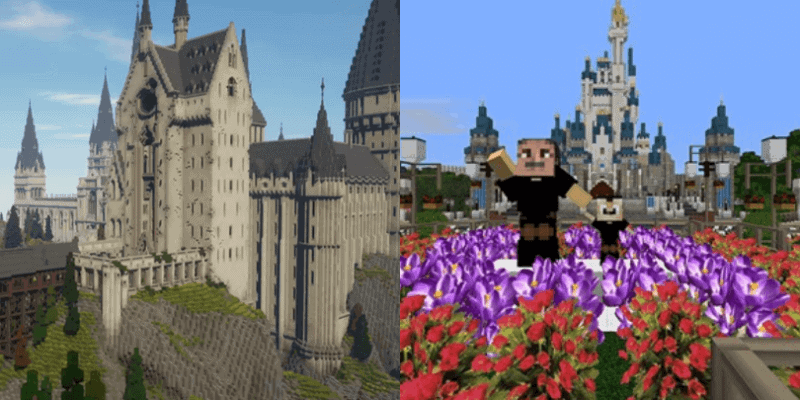 If this time of crisis has proven one thing, it is that people’s creativity knows no bounds and that the theme park worlds and fantastic realms of Disney and the Wizarding World of Harry Potter are the inspiration for elephantine amounts of fan creativity all over the world. As we ache to go back to these worlds of fantasy, fan recreations have been undertaken on a massive scale. And now, recreations appear to have reached its apex.

You can now enjoy a day in Walt Disney World and a day in the World of Harry Potter in the virtual reality realm of Minecraft.

After four years of being under construction, a team of Minecraft modders called The Floo Network has finally unveiled the entire world of Harry Potter. From Privet Drive to the Griffindor Common Room, and all of the Hogsmeade shops in between.

But the team created far more than just a cool map to explore. It offers a full video game experience that offers you the chance to live your own life as a witch or wizard! Play a game of Quidditch, take a potions class, fight death eaters and more!

This massive project was undertaken in Minecraft’s survival sandbox where die-hard fans have no-doubt made their own attempt to create their favorite real or fantastical places to share with the world.

Craving a day at Disney day? Fans can curb their withdrawals with this Disney World Minecraft mashup! Made possible by The Imaginears Club, you can now use Virtual Reality to delve into the Most Magical Place on Earth.

Over 100 volunteer cast members have signed on to help bring the magic to life through the realm of Minecraft. From taking a ride on the Seven Dwarfs’ Mine Train to taking a “Traditions” class with future cast members, the possibilities are nearly endless.

Since this is meant to be a family experience, the creators of the program have stressed the importance of safety on their servers.

“With so many game servers, there’s almost always the threat of trolls or people digging for personal information,” said creator David “Duckie” Wasman. “Our suite of tools allows us to monitor chat and clear it when needed, or remove unruly guests without anyone seeing it, thereby keeping guests focused on the enjoyment rather than the drama. We’re able to keep chat 100 percent safe for folks of all ages.”

Do you like to play Minecraft? Does the opportunity to explore Walt Disney World and the Wizarding World make you want to start? Let us know in the comments!