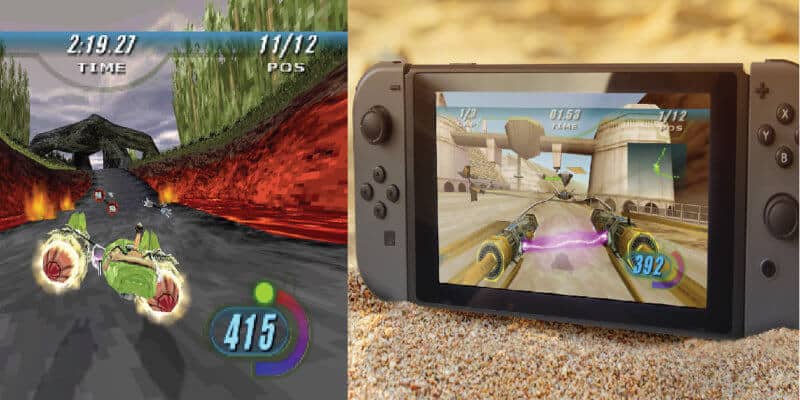 The multi-platform, 90s classic favorite Star Wars Episode 1 Racer is returning! Just announced on the official Star Wars website, podracers can prepare to blast off on the Nintendo Switch and PS4 in the near future.

Initially released in 1999 on multiple platforms such as Nintendo 64 and Dreamcast, the game was a huge success for fans who had just seen Star Wars: Episode 1 – Phantom Menace the same year. There’s nothing like rewatching the opening crawl of the game:

“For generations, the GALACTIC PODRACING CIRCUIT has thrilled citizens of the Outer Rim Territories with its fast and dangerous contests of repulsor and turbine-driven land vehicles.

Amid the ruffian and racing elite, one champion stands above the rest. His name is Sebulba, a cunning and ruthless pilot who wins by any means necessary.

To challenge him, all the best Podrace pilots gather on the desert planet Tatooine for the legendary BOONTA CLASSIC determined to claim the title of fastest podracer in the Galaxy…”

Racer lets players live out the fantasy of the iconic podracing sequence in Star Wars: Epsidode 1 – The Phantom Menace. Race through worlds like Tatooine, Baroonda, and Malastare, discovering shortcuts and secrets to score your best time! Players enter tournaments that unlock new characters and tracks, as well as prize money to upgrade their podracers. Racer features 6 initial racers that include characters such as Anakin Skywalker and Dud Bolt. Players can unlock almost 20 more additional racers. There are multiple modes to play on, including Tournament, Free Play, and Time Attack.

Despite the new features, the announcement appears to confirm that the original graphics will remain with slight alterations optimized for the modern platforms. With this, we can expect that the original soundtrack, as well as CGI scenes, will return as well.

Related: Make an Out of This World Millennium Falcon Inspired Recipe At Home!

Are you planning on picking up a copy of the classic favorite when it debuts for modern platforms? Let us know your thoughts in the comments!

Comments Off on Podracers, Get Ready! “Star Wars Episode 1 Racer” Set to Return to Nintendo Switch and PS4