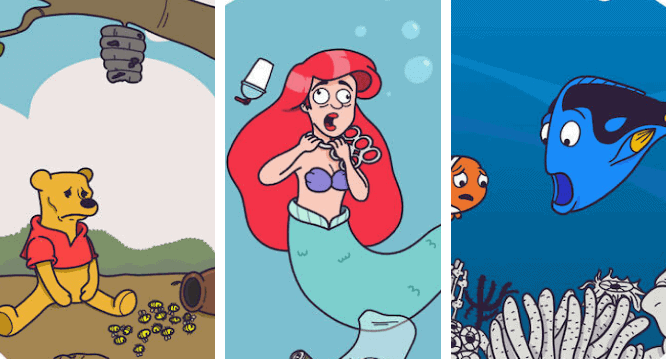 Real-life environmental issues have been at the forefront of the news since we were kids. As the online news system grew, we were able to learn about environmental difficulties from around the globe and therefore, become more sensitive to our own actions. Movies, music, television, and artwork began to reflect life, and continue to do so.

Artist “The Baptman,” Baptiste Drausin, uses Disney characters to bring awareness to ecological disasters that have plagued our globe. Some of these images may seem graphic, if only because of beloved personalities becoming afflicted. But if you can make one small change because of these illustrations, our world may become a better place!

We’ve already seen certain species go extinct in our time, and have pulled others, like The White Rhino, back from the brink. If certain animals like Honeybees, Orangutans, or Lions went the way of the Dodo, how would that change our world? The Baptman explores these extinction themes using characters from The Jungle Book, The Lion King and more.

Chemicals? They certainly make our modern lives easier and safer. But the wrong kinds or chemicals used in the wrong way can have drastic effects. Snow White seems to be on to Queen Grimhilde, in this case. And Mary Poppins would have more than her fair share of work cut out for her if she arrived in many global metropolitan cities in the 21st. century. As far as Bambi goes? Deforestation and too much weedkiller could have (and do have) an effect on forests and wildlife. Bambi’s feeling the effects, too.

Remember that Pacific ocean “island” made of trash? It’s getting too close to our oceanic Disney Friends. With coral reefs shrinking and plastic waste choking waterways, our Disney friends may have a dark day ahead of them. Please clean up after yourself and remember those 3 “Rs!” Reduce, Recycle and Reuse!

On his Instagram, Baptiste Drausin continues to share other witty and sadly insightful looks into our world, tempered by his whimsical animation. Pop culture references abound, catching the audience’s attention and then holding them with a somber thought. Here, Snow White is used for laughter while mixing in John Snow from Game of Thrones. Add seven dwarfed Ghosts and you’ve got a fairy tale ready for the illustrating. As you scroll his Instagram feed, notice that he’s using his art for a purpose. Good art is intended to make you think and feel… and The Baptman’s feed will do that!

What would you like to see Baptiste Drausin illustrate? Leave us a comment below and don’t forget to support The Baptman’s amazing work!