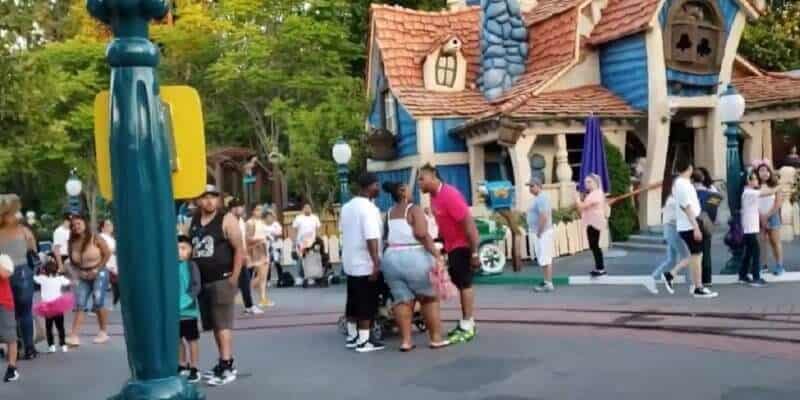 A Las Vegas man that was part of the Disneyland brawl that occurred in Mickey’s ToonTown on July 5, 2019, has received his sentence: 6 months in jail starting immediately.

According to the Los Angeles-area Fox News Affiliate, Fox 11:

Robinson will also have to participate in a batterers’ treatment program as well as complete eight hours of community service.

This is the first conviction to arise from the charges brought before the family at the center of the brawl, but it most likely won’t be the last. Robinson’s sister, Andrea Nicole Robinson, 41, and her husband, Daman Petrie, 44, failed to appear in court and a warrant has been issued for both of them.

Both [Andrea] Robinson and Petrie have charges against them from the brawl.

Recap of the Disneyland Brawl & Everything After

1. A Fight Broke Out Between a Family at Disneyland

Last summer, the video of a family brawl at Disneyland was shared all across the internet. At the time of the fight, no single cause for the fight was known and Disney security escorted everyone involved out of the park and off Disneyland property.

You can read the full details of the fight and see the video (warning: explicit language and violence) by clicking the link to our original coverage below:

2. Despite a Viral Video Proving Otherwise, the Family Denies Everything

Yes. They denied everything that had happened.

Not a joke. There has to be an investigation. The parties involved all denied anything occurred and we were not there to witness it. The videos that were not available at the moment make things clear and the case has been presented to prosecutors

After the family scrum was put down, Anaheim police quickly began their investigation of the incident. But despite their denial, police had enough video evidence to bring a case to the Orange County District Attorney’s office for review and prosecution.

You can read our original coverage of that chapter in the story by clicking the link below:

3. Family Members Get Charged & Fail to Appear in Court

Three adults out of the family brawl faced charges against them.

Before accepting his plea bargain, Avery Robinson faced up to seven years in prison and the following charges:

Robinson’s sister still faces up to 2.5 years if convicted.

Robinson appeared in court. However, his sister and brother-in-law failed to appear. You can read our original coverage of those chapters of the story by clicking the link below.

Now, it is still unclear who or what caused the fight to start back in July of 2019, and there is no word at this time if Robinson’s sister and brother-in-law will face more charges when they are finally brought in to court.