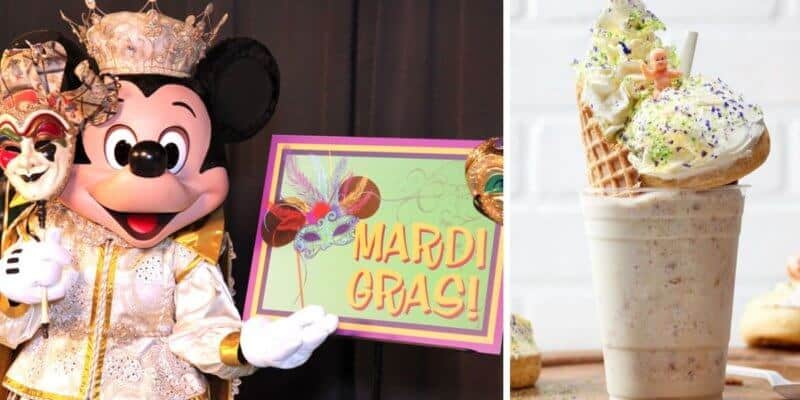 If you love gelato, then you have to check out the sweet treats being offered at Vivoli il Gelato in Disney Springs at Walt Disney World.

Vivoli il Gelato is known for its massive (and fun themed) shakes. From the gingerbread shake to a St. Patrick’s Day themed shake, even an Avengers-themed shake was debuted in honor of Avengers: Infinity War.

And now Vivoli il Gelato in Disney Springs is getting into the Mardi Gras spirit by debuting their latest shake creation — The King Shake!

The King Shake consists of cake gelato and is served with a waffle cone. It is then topped with a cinnamon roll and whipped cream.

The official Vivoli Li Gelato Instagram page describes this new King Shake as “Crown yourself king for a day and enjoy a King Shake! King Cake gelato is spun with milk and served with a waffle cone, a cinnamon roll, and whipped cream!”

Did you know that Vivoli Li Gelato is considered to be one of the oldest gelaterías in Florence, Italy and Vivoli’s original location began scooping out its homemade ice cream in 1930?

Here we are, generations later, and Vivoli Li Gelato is continuing their tradition at Disney Springs along with brand new sweet treats for Disney guests to enjoy.

Do you want to visit Walt Disney World to try the new King Shake at Vivoli Li Gelato but need helping planning the vacation of your dreams? Don’t hesitate to reach out to our friends, the Authorized Disney Vacation Planners at Academy Travel, for a free quote, today!

Do you want to try the new King Shake at Vivoli Li Gelato in Disney Springs? Let us know in the comments.