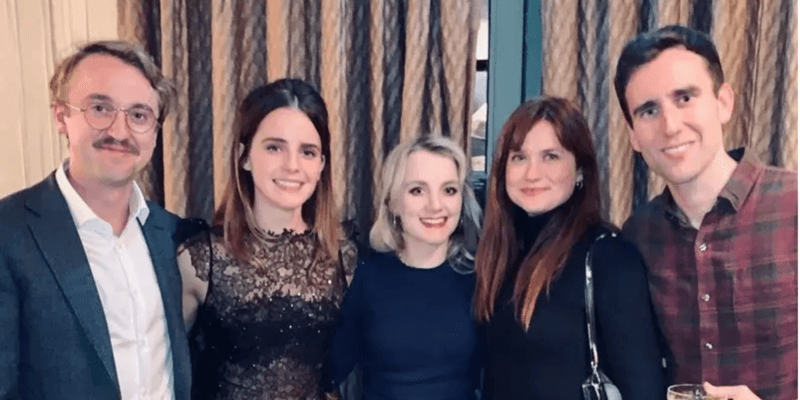 It’s the holiday season which means reunions, pictures, and good wishes. It also means that Harry Potter fans get to see a reunion pic from some of their favorite Hogwarts students.

On Wednesday, December 18, 2019, Emma Watson(Hermione) posted a picture on her Instagram with some of her former co-stars:

All five were smiling and looking sharp. Watson captioned the picture with simply “Merry Christmas from us.” You can see the post here:

Merry Christmas from us ☺️

For those who want to appreciate this moment in color, don’t worry. Tom Felton also decided to share this picture on his Instagram, and he included color. He captioned the picture “Seasons Greeting from my school mates.” You can see that post here as well:

Harry Potter fans never seem to get enough of their heroes living their post-Harry-Potter lives, and with these two posts generating over 3 million likes combined, it doesn’t seem to stop. One also has to miss two guys in particular: Daniel Radcliff and Rupert Grint.

While achieving a great deal of success off-screen, Watson also made the jump from Witch to Disney Princess. She took on the role of Belle in Disney’s live-action remake of Beauty and the Beast and is beloved by Disniacs and Potterheads alike.

For those who still want to go back to Hogwarts, Christmastime in the Wizarding World of Harry Potter is something you do not want to miss. Diagon Alley in Universal and Hogsmeade in Universal’s Islands of Adventure Park are decked out with snaux(faux snow) and holiday decorations. In Hogsmeade, guests can listen to the Frog Choir sings some carols and watch the Christmas at Hogwarts Projection show.

If you have been dreaming of a Harry Potter Christmas, our friends at Academy Travel are standing by to help you plan the perfect holiday getaway. Get started today!

Who was your favorite Harry Potter Character? Do you still keep up with the cast? Let us know in the comments!