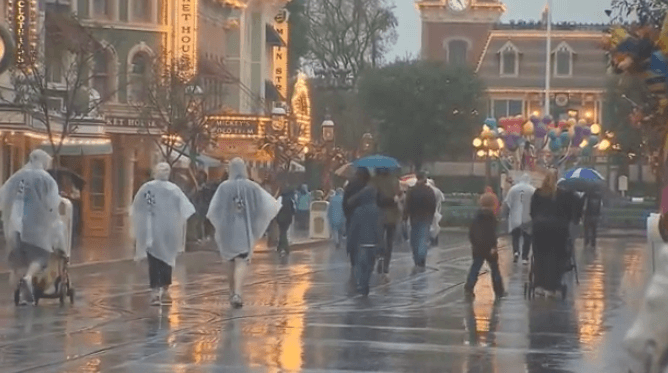 When it rains, it pours. At least, that’s what they say in California.

Due to a powerful storm rolling through, Disneyland and Disney California Adventure will be closing early as both theme parks prepare.

The cold and powerful storm is set to sweep across Southern California just in time for Thanksgiving and due to this unfortunate weather, Disneyland and Disney California Adventure will close early.

The @DisneylandToday account stated “That doesn’t mean the magic will be any less! Grab your rain gear and join us for some fun!”

Both parks will open at 8 a.m. on Thursday.

We are adjusting our park hours by one hour tomorrow and Thursday for Disneyland and Disney California Adventure, but that doesn't mean the magic will be any less! Grab your rain gear and join us for some fun! pic.twitter.com/mcBVCTyODA

This cold and powerful storm is set to come out of the Gulf of Alaska and is expected to unleash a lot of rain as well as cold winds, all beginning Wednesday and continuing through Thanksgiving, according to the National Weather Service.

Strong Santa Ana winds are forecast to gust up to 70 mph and a winter storm warning will be in effect through 4 am Friday.

It is actually very rare for Southern California to get this amount of rain and it is even less common for it to be enough to shut down Disneyland Parks. The last time this happened was on February 2, 2019 after heavy rains and wind began to hit a majority of Southern California.

Disneyland has also closed early on January 22, 2017 due to heavy rains. Again, this has only happened a handful of times before due to inclement weather as California does not normally get this type of weather.

Disneyland has had to unfortunately cease operations unexpectedly for other reasons though on three separate occasions:

Everyone stay safe this holiday weekend. Happy Thanksgiving, everyone!

Comments Off on BREAKING: Disneyland closing early due to powerful Thanksgiving storm