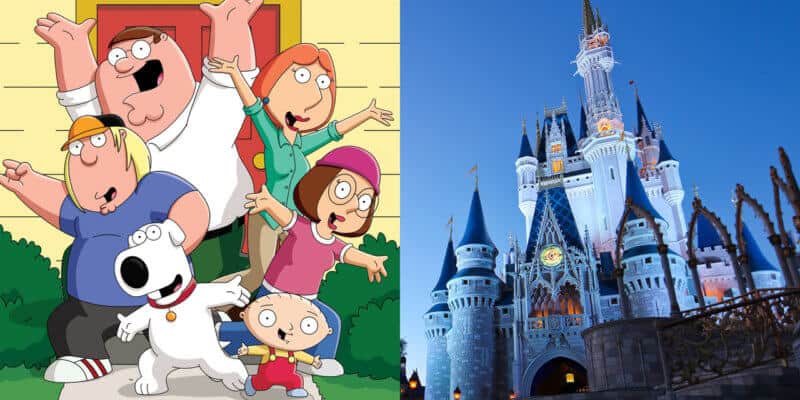 As most Disney fans know, the epic merger of The Walt Disney Company and 20th Century Fox rattled the world of media, including some of our favorite 21st Century Fox’s film and TV assets. And with everything, the Griffins have to make fun of it.

Premiering October 20 will be the first of three new reboot episodes in “Disney’s The Reboot,” which follows the storyline that the network (now under Disney’s control) thinks the animated series needs a refresh to be more current and forces the show to undergo three new reboots.

“One of them is Family Gal–it’s Losi-centric, very timely and pandering,” said executive producer Rich Appel. “Another is our version of something like Riverdale or a teen-angst drama, called ‘The Q.’ And the final one is ‘After Family Guy,’ which as we explain, is starring the only actors who didn’t go on to bigger movie careers. The premise is Chris is now married to Tricia Takanawa, and they’re raising Joe.”

Similar to the premiere of any new show or reboot, the series will then go through a focus-group. However, Appell says it will more of a “focus-group Hell” as the Griffins will watch the group give criticisms of the new show from behind a two-way mirror.

“Peter storms in angry at the focus group and they say, ‘I don’t get who Family Guy is for,’” teases executive producer Alec Sulkin. “And he says, ‘It’s easy! You just have to be a teenager, but born in the ’80s.’”

For those wondering, this parody episode from the series will not take direct shots at The Walt Disney Company. However, Sulkin says characters who fall into the Disney umbrella may be referenced in future episodes.

“So we’re just trying to test the waters in terms of what we can and can’t do.” For those wondering if Disney has been keeping a close eye on this project, Sulkin says the TV show remains under 20th Century Fox TV and they have not faced “one iota of change.”

When asked how quickly it took the writers to decide to turn the purchase of 20th Century Fox by Disney into an episode? Appel revealed it was quite quick: “I’d say about 20 minutes.” “It just seemed to give new life to an idea of how to make Family Guy fresh, and a new reason to think we’d have the always-helpful focus group to guide us.”

For those wondering if this new merger means the writers would be able to incorporate other Disney-owned characters into “Family Guy.” Appel says the chances are not very high.

“Part of their M.O. — and it’s obviously worked very well for them — is to be protective of their different brands and in a way to keep them separate. So if we went to them and said, ‘Hey, we want to do a Marvel–Star Wars crossover episode,’ I think that would probably be the fastest ‘no’ we’ve heard around here in a while.

What are your thoughts on “Family Guy” making fun of the Disney-Fox merger in upcoming episodes? Let us know in the comments below!